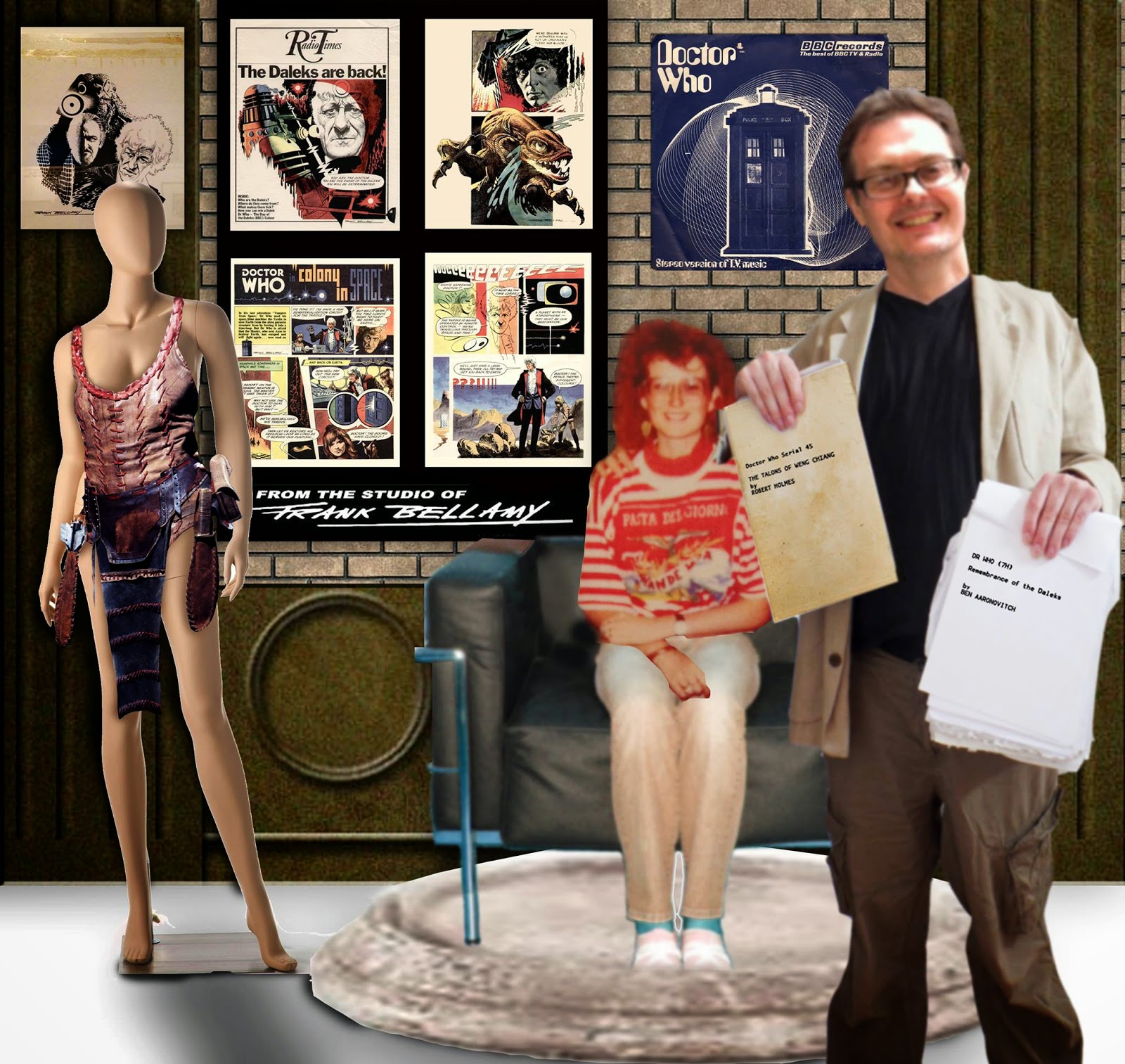 You’re in a library and it’s huge.  Thousands of books and comics cling to the walls, held up on dust-free clear plastic shelves.  The air shimmers and tastes faintly of ozone and iodine.  The shelves stretch to a distant vanishing point.  You start moving forward.  Tiny sparks dance around your feet with every step.  You guess the floor can’t be marble after all.

Slowly the end of the room comes into focus.  A smiling man is holding up two bundles of paper, one obviously much older than the other.  You can’t make out the writing on either.  Behind the man – a librarian, maybe? – there's a smiling woman sitting on a sofa that looks reasonably comfortable.  A chamois leather decorated mannequin stands to the left, behind it the wall has been tastefully decorated with a collection of exquisite prints.  There’s no cake anywhere.

Talk to the 'librarian'?

Examine the bundles of paper?

Sit on the sofa?

Attack the mannequin?
Posted by Al at 12:11 No comments: 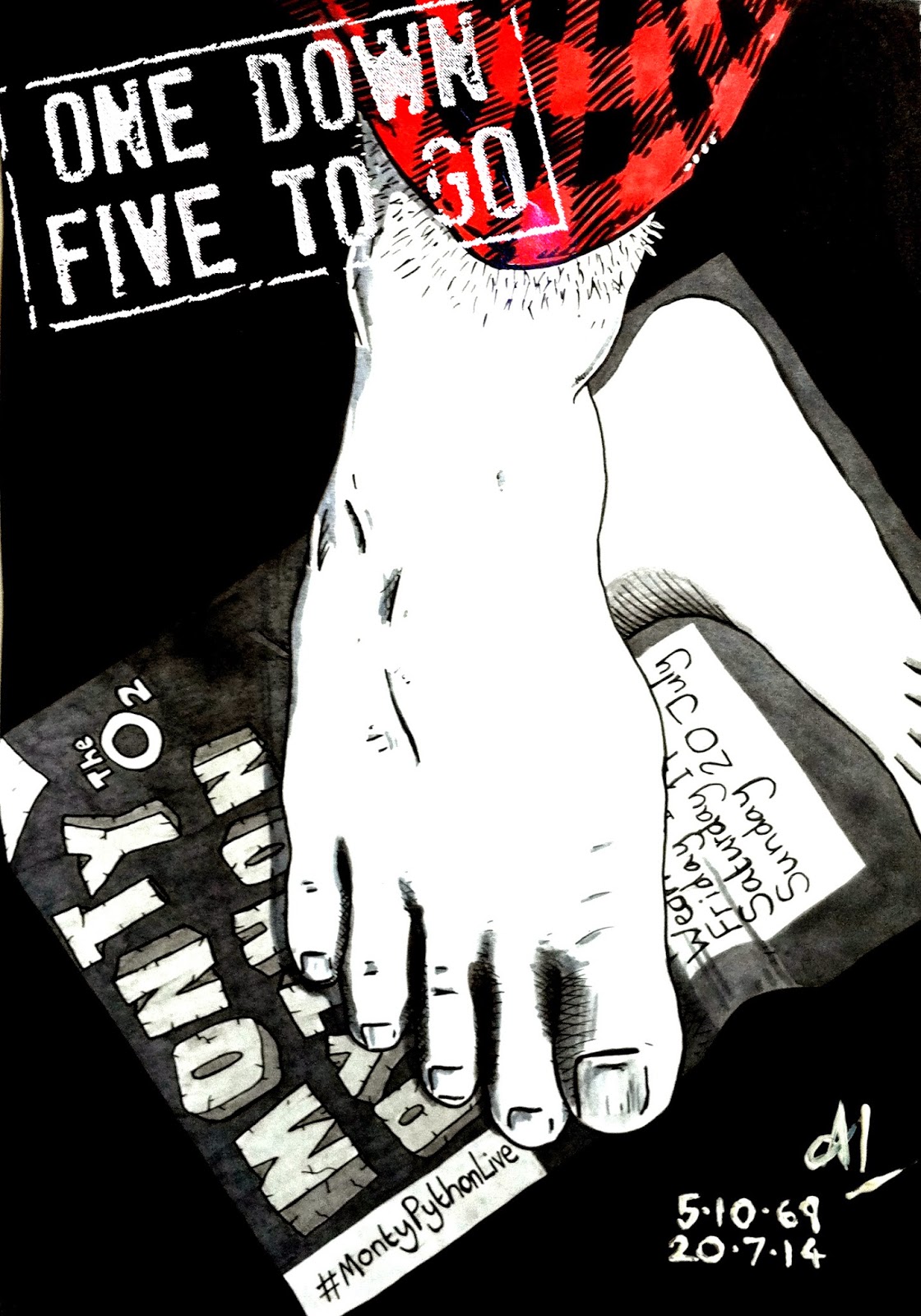 Critics have their purposes, and they’re supposed to do what they do, but sometimes they get a little carried away with what they think someone should have done, rather than concerning themselves with what they did.
- Duke Ellington

Him:  I wish you’d stop calling it a car park.

Me:  And all your Scottish Physics teachers were there.  No Gumbies though.

Him:  Right, none of my teachers were there, as I pointed out several times and nobody’s going to get the ‘Scottish Physics’ thing.

Me:  Especially seeing as we live in the Arctic.

Him:  Exactly.  And it’s not even funny if you know what it means.

Me:  Is this the right room for an argument?

Me:  The one that started after we got there.  Oh, hang on-

Him:  I’ve got no idea what you want me to say.

Me:  Let me just stick this brief Twitter conversation in. 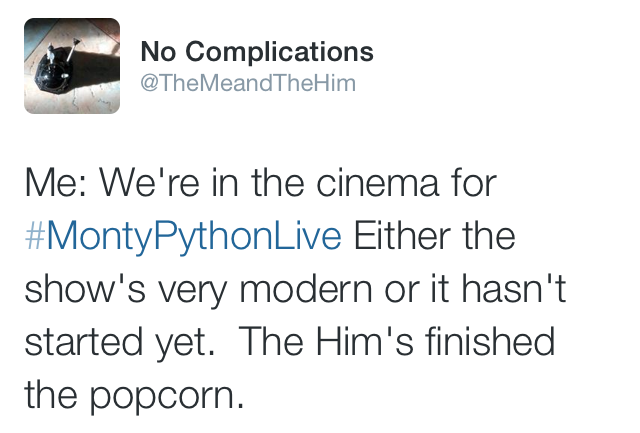 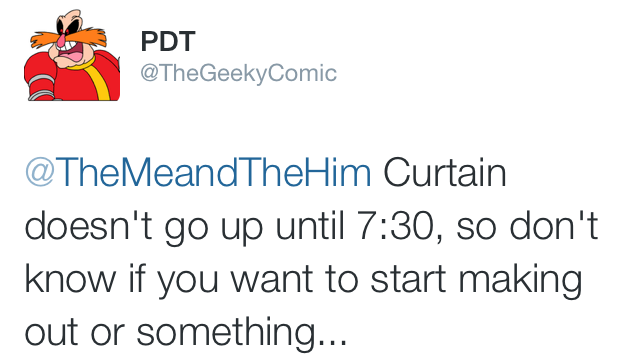 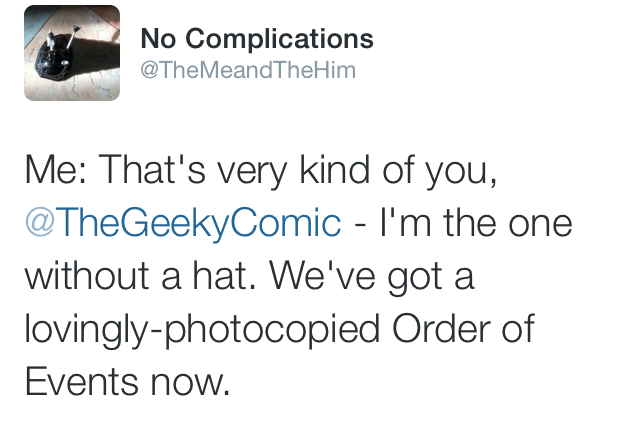 Him:  You never did get more popcorn.

Me:  Nope.  I didn’t want you to start cosplaying as Mr. Creosote.

Me:  No. I’ll explain why in the second performance.

Me:  Do you want to say anything about the countdown?

Me:  Did you recognise many of the songs?

Me:  Could you answer the trivia questions?

Him:  I only remember one.

Me:  I expect I know which one that was.

Him:  Which one then?

Me:  Ah.  Did you like the behind the scenes films?

Him:  They did seem to make it look as though Eric Idle was the only one still alive.  But that’s because he was directing it.

Me:  I’m not sure he was directing it.  I don’t think it would’ve happened without him.

Him:  He was directing it, it said so in the credits at the end.

Me:  There we are then, that explains why it was all Broadway.  Who are the Rolling Stones?

Him:  They were spherical standing stones.

Me:  I was hoping you’d go for something about ancient monuments.

Him:  Well, you can take it or leave it.

Me:  I snapped a picture of the pre-show screen.

Him:  Even though your phone should’ve been off. 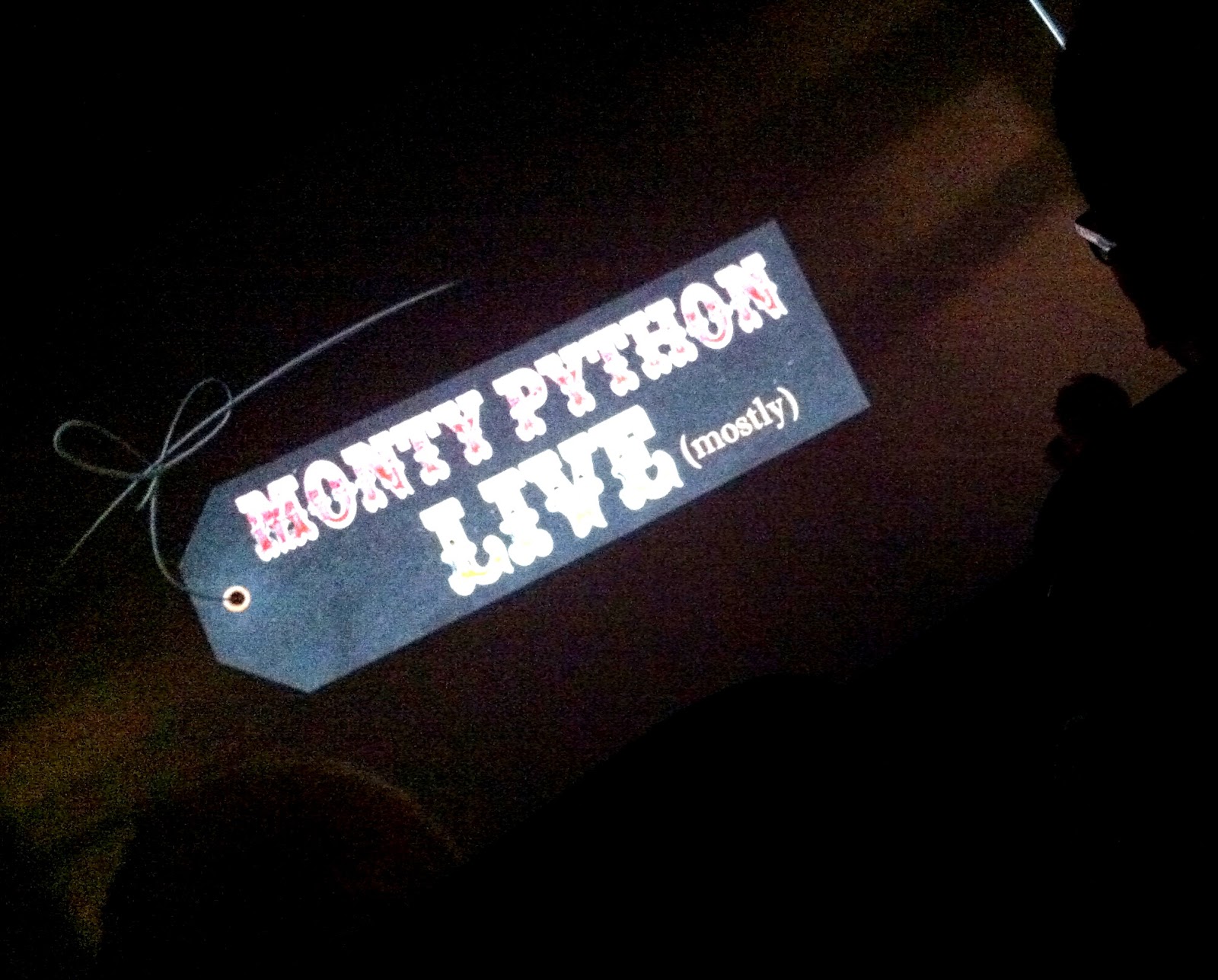 Me:  Were you excited?

Him:  I don’t think I was as excited as you were.  Or the millions of other people, who were exactly like you, surrounding me.

Me:  Hmm.  How many sketches from the first act can you remember?

Him:  Probably around about as many as you can.

Me:  I thought it went by really fast.

Him:  The first act went by significantly faster than the second act did. 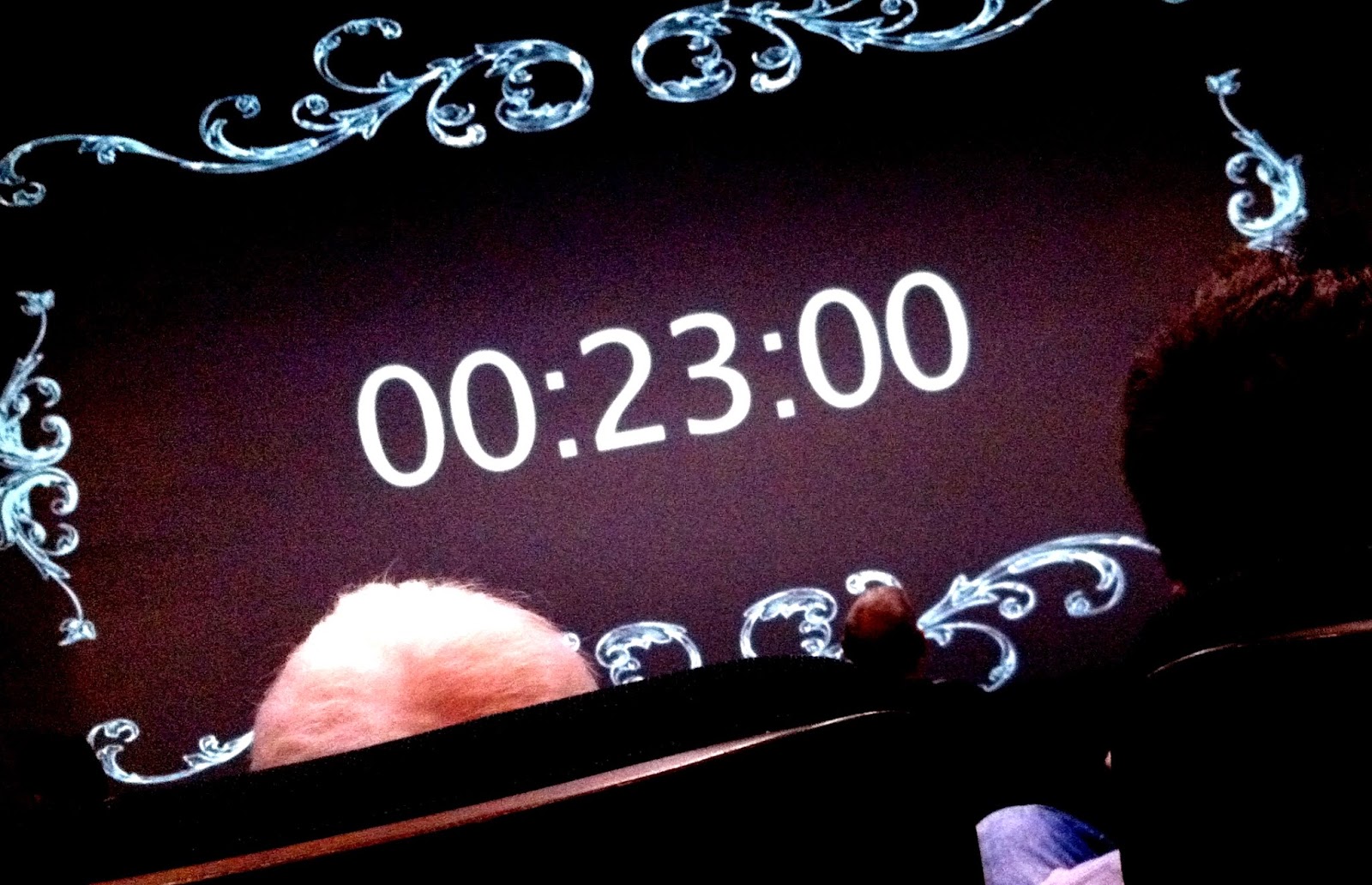 Him:  Instead of having us talk in the interval, why don’t you put a link to a YouTube video of elevator music or something?

Him:  Well – when typing it up…  You haven’t technically done it yet, so I don’t know.  I assume so.

Me:  How many times do you think the people serving refreshments got asked for albatross?

Him:  The joke I made about that can’t be typed.  You would have to find…  Ooops.

Me:  Have you just broken that? 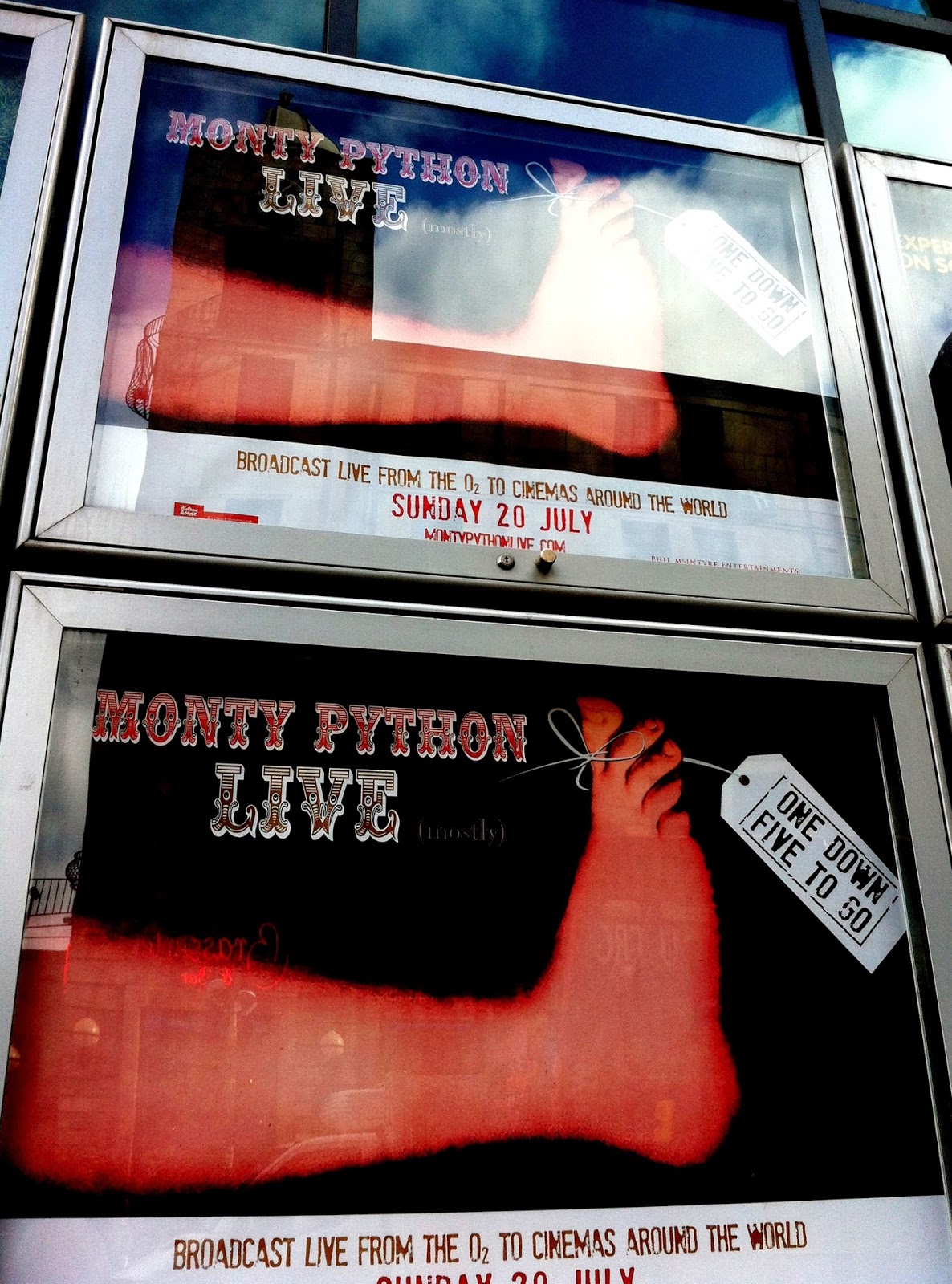 Me:  Okay, let’s run through the Pythons individually.

Me:  And, this is just based on tonight.

Me:  Yeah, he did seem to be resting on his laurels a bit. That bit he did before the TARDIS3 cropped up was promising, but after that he seemed to just repeat all his old performances.  He’s aged better than the rest of them.

Him:  They were quite nice to him there.  As opposed to that one where Terry Gilliam knocked over his urn.

Me:  That was at Aspen.  Huge laugh that got.

Him:  Well, I’ve personally never seen it, but you’ve told me about it.

Me:  Yeah, there’ll be a link somewhere.  And I’ll go into more detail in the second part.  Terry Jones.

Him:  Old and more clothed than usual.

Me:  Ha!  Yeah.  He comes across as a lovely bloke.  I don’t know.  I thought he seemed a bit more subdued than the rest – like he was holding back.

Him:  He was probably just a bit warm.

Me:  What was it with that heat haze?

Him:  I was referring to the fact that he doesn’t usually wear clothes.

Me:  Well, if the part calls for nudity then Terry Jones is the man.  Okay, Eric Idle.

Him:  Certainly alive.  No doubt about that.

Me:  It felt a lot like he’d bashed it together.  He was having a great time.

Me:  Eric Idle was really good at piecing the shows together back in the Flying Circus days.  I knew re-reading their Autobiography would help.

Him:  That’s not why you read it though.

Him:  As shouty as usual.

Me:  I thought he was very good.

Me:  Oh, yes – very much.  John Cleese looked like he was having fun though.  Carol Cleveland.

Me:  Probably.  I thought she was outstanding.  Especially in the Lumberjack Song.

Me:  I thought that – personally – Michael Palin and Terry Gilliam were brilliant.  Gilliam especially.

Me:  Hard to say.  Terry Gilliam’s been a bit down on the whole enterprise, so seeing him throw himself – literally at times – into the show was…  Weirdly moving.  Especially that really, really, really, long fart gag.  Brought tears to my eyes.

Him:  I have no idea how to reply to that.

Me:  I liked the corpsing, the mistakes – apart from the audio dropouts in the live feed-

Him:  Yeah, those were annoying.

Me:  The guest appearances were cool.  Stephen Hawking especially.  Also, I wasn’t surprised that the first half was edited when it went out on telly.

Him:  Well, the rating itself was a bit-

Me:  12A?  That was optimistic.  Especially when they were wheeling out props borrowed from Rammstein. 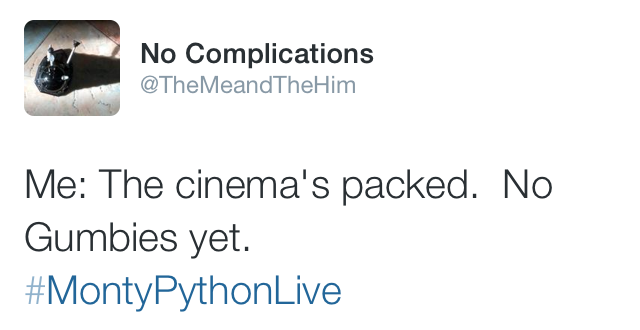 Me:  I never thought I’d be part of a singalong in a cinema.

Him:  I hoped you’d never be part of a singalong in a cinema. 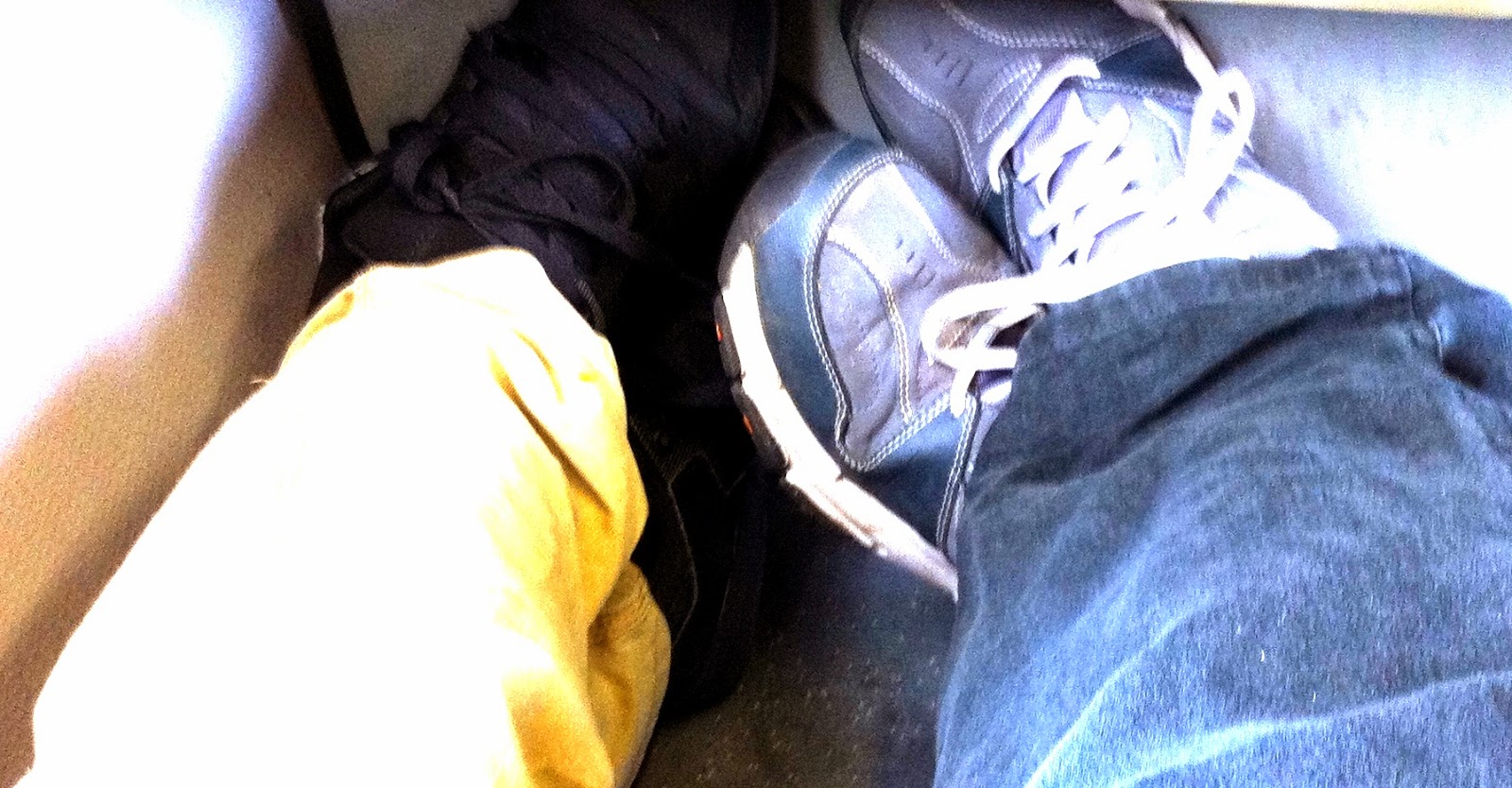 Me:  Couldn’t do it logistically, not really.  At least this way we were part of a…  I don’t know.  Collective experience?  Crowd?  Should they have done it?

Him:  Well, it reminds me very much of another reunion that happened fairly recently.  Unlike that one, I do think they should have done this one.

Me:  Right, faithful reader, after a short intermission we’ll have something completely- 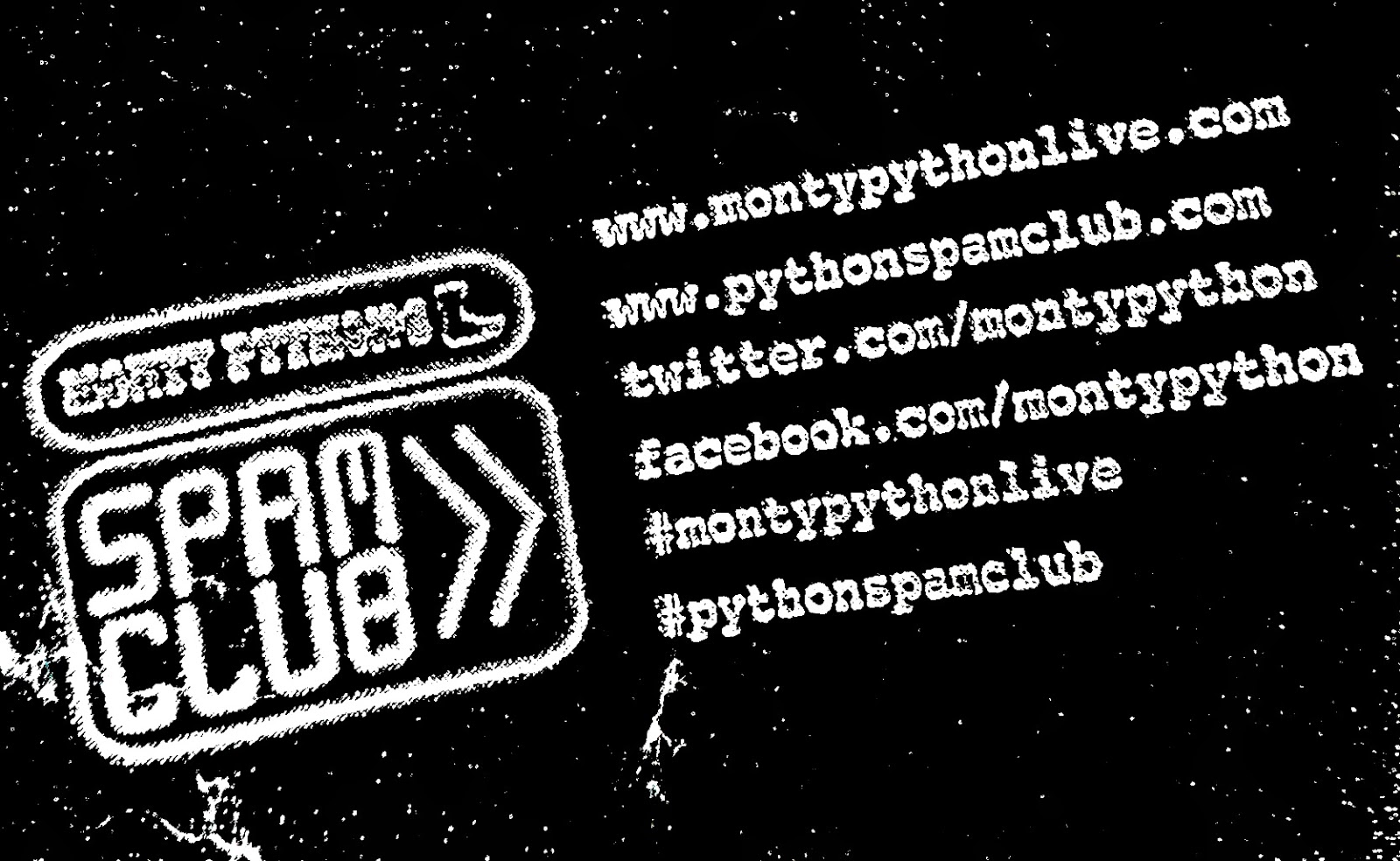 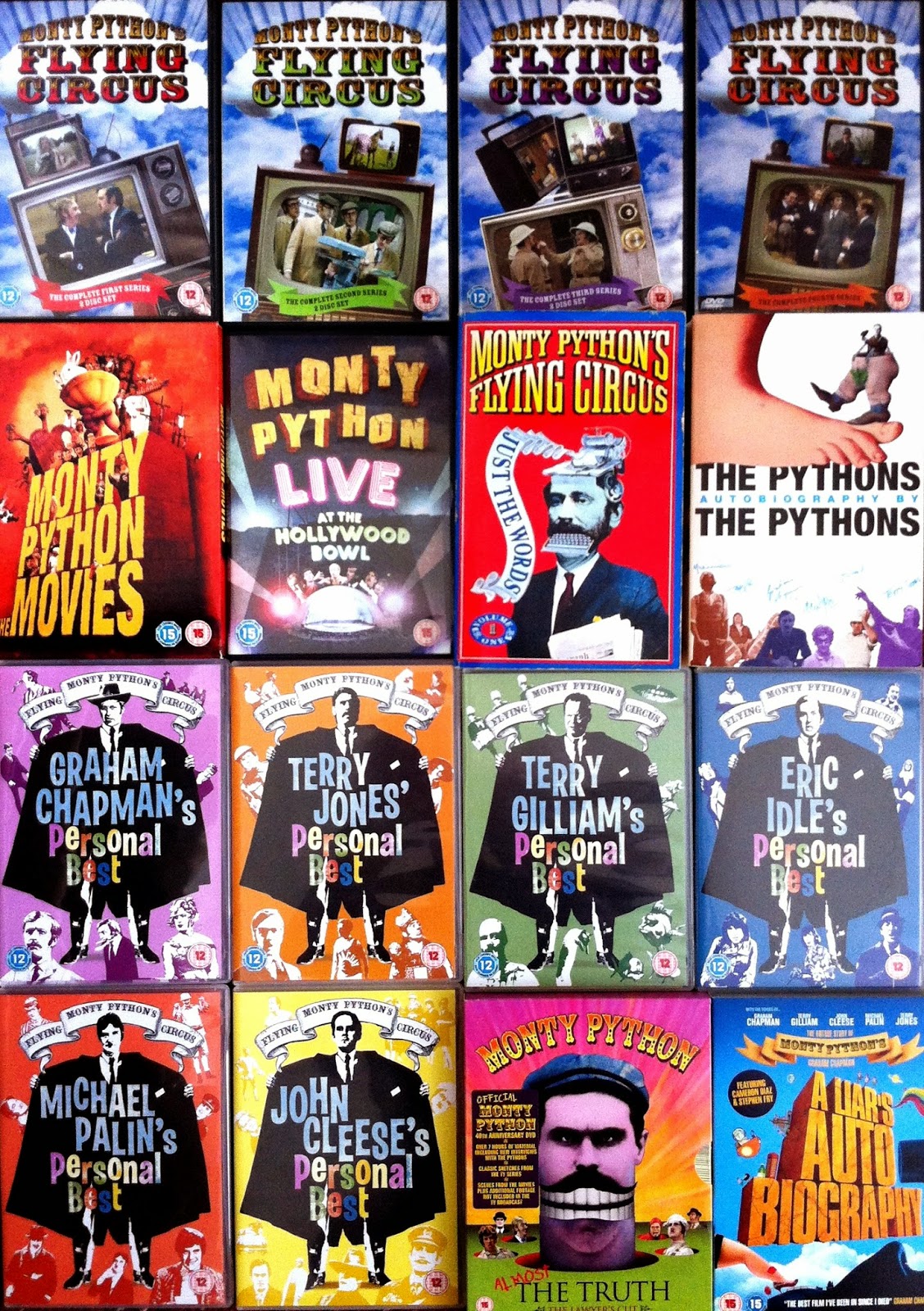 Just because you like my stuff, doesn’t mean I owe you anything.
- Bob Dylan

Python have always been there, lurking in the bushes.

Probably my earliest experience was the warning poster and snatches of upset adults on the news.  They’d killed Jesus or something and it made a lot of people very sad.  After that?  Dunno.  I lived in a post-Python world.  They were part of the fabric.  Like snow or stinging nettles or school or other stuff beginning with ‘s’.

Sometimes stray repeats would appear on my black and white TV when I was supposed to be asleep.  Barking nonsense broadcast from the bushes; secret signals to latch onto and superimpose on the regimented conformity of all that tedious scholastic bollocks.  Dust-choked lessons were brightened immeasurably by looking for the surreal.  It became a game the Outlers played.

Like climbing under piers at high-tide, the Python were dangerous, forbidden.  Fawlty Towers and Ripping Yarns were approved.  Strange times anyway, what with the Doomsday Clock waiting for the unions to sort out whether it was the responsibility of Scenery or Electric.  The Apocalypse has been delayed due to industrial action.  Meanwhile, here’s some music.

Familiarity breeds acceptance and that’s a good camouflage for something patient.  F-bombs still necrotise the uninoculated pre-watershed innocents, chewing off their faces and spiking their carbonated sugar syrup with mescaline for good measure.  Bastard Python.  How dare they?  How dare they?

Twits complain that the animal uses the same attack it always did, springing out of the bushes like it always did.  Shouldn’t it try flying or a pincer movement or grabbing a leg and executing a death roll or something?  Of course, by complaining they just prove a point.  Namely that they’re twits.

You can’t thank a predator for doing what it does and you can’t thank a force of nature for stirring something in you.  Python don’t feel sentiment.  They wait, sleep, strike and occasionally reproduce stunted, slightly crap off-spring, but they don’t feel sentiment.  Python changed the consciousness of humanity slightly, like football, tapeworms or iPhones.  And, like football, tapeworms and iPhones, some people were more affected than others.  That’s how culture works.  Python don’t care if you’re sad, that’s your problem.

Y’see, Python will always be there, lurking in the juniper bushes. 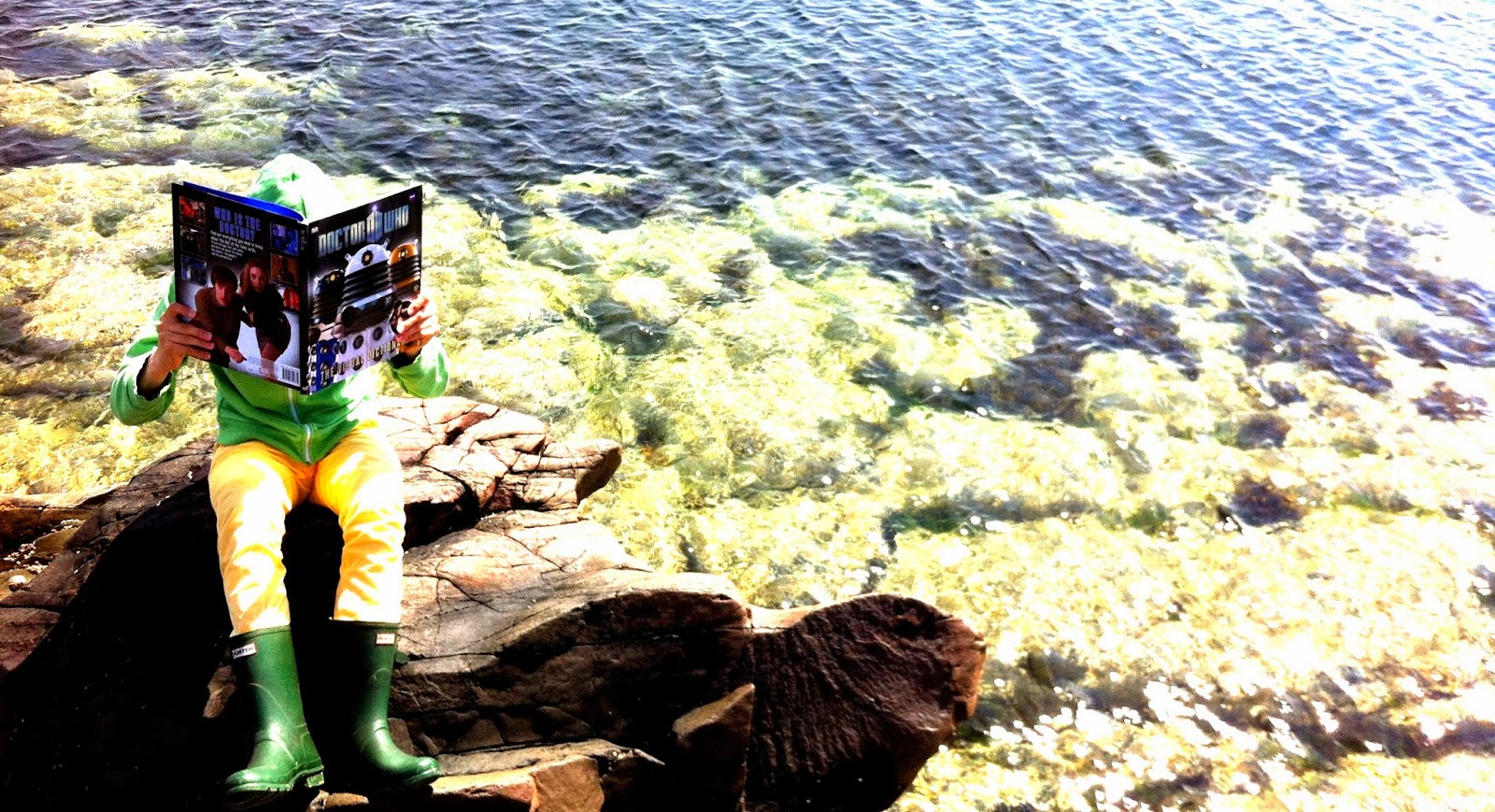 Dictionaries are like watches, the worst is better than none, and the best cannot be expected to go quite true.
- Samuel (‘Sausage’?  ‘SAUSAGE’?!) Johnson

Him:  Sounds like the sort of tent a conman would try and sell you.  A ‘Con-Tent’. 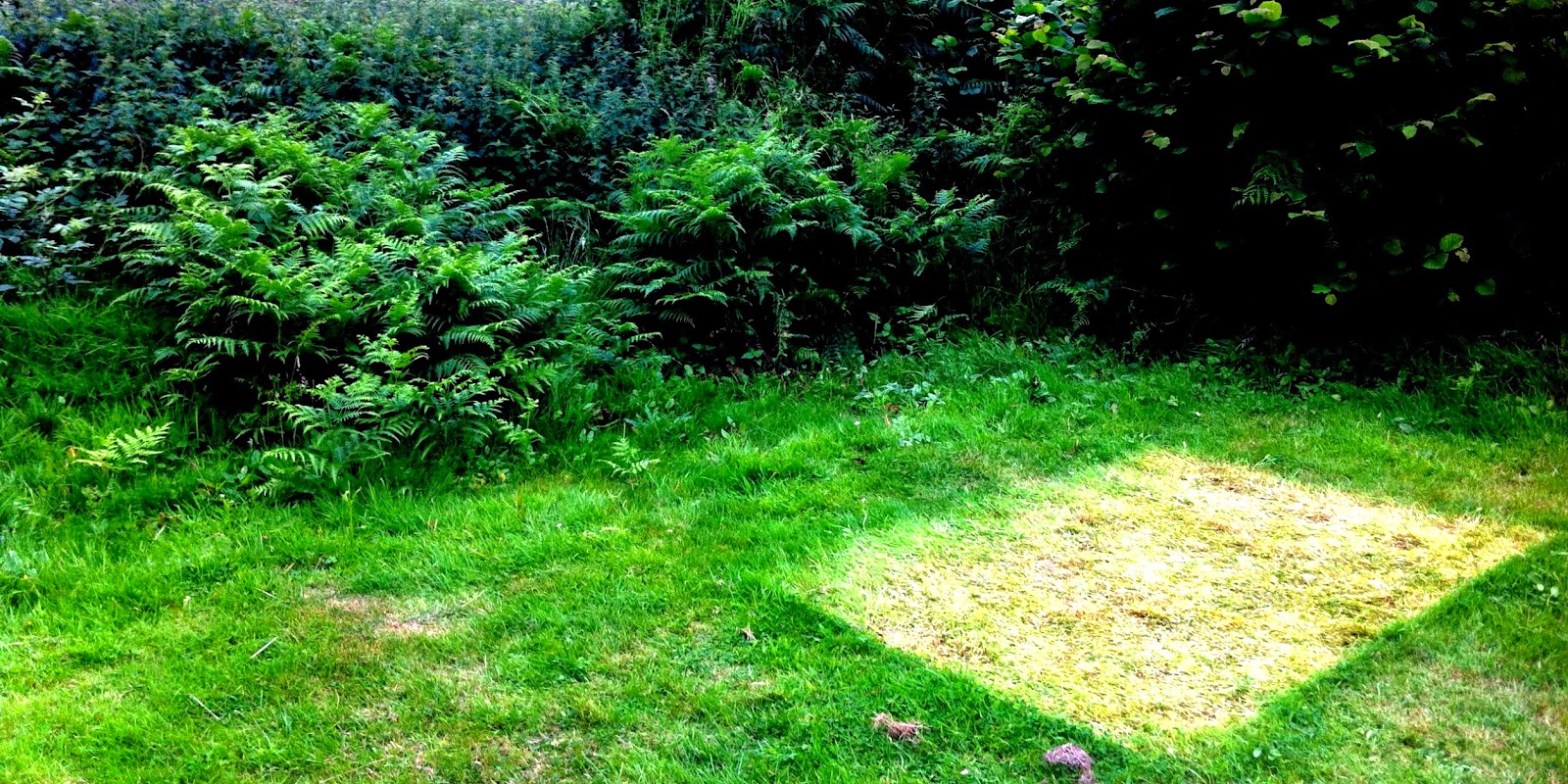 Him:  Why do we keep going back there?2

Him:  It’s full of giant crabs!

22 TOOLS OF THE TRADE

Me:  What’s the stabby thing again?

Him:  It stops birds from landing on your electric fence.

Him:  Birds aren’t affected by electricity.

Really long pause, like a sea-badger reflected in a fun house mirror.

Him:  They’re all made of rubber.

Him:  It doesn’t burn as quickly as you’d think it would.

Me:  True.  We were miles away before Colony security turned up.

Him:  Are you going to say, “Whoops, butterfingers”?

Me:  I think you should.

Me:  I need the loo. I tell you what, when I’ve typed all this, I’ll phone a curry. Is that alright?

Him:  Okay, let’s talk about Ironsides.

Him:  No.  They’re not very interesting, are they?  Let’s make up random stuff.

Me:  What’s that got to do with Flossie?

76 GUESTS OF PLATFORM ONE

Me:  The weather was mostly well-behaved.

Him:  It defied everything the weather man told us.

Me:  Almost as though something was controlling it…

Him:  I can plainly see that.

Him:  The Black Shuck.

Me:  Almost.  You’re getting there.

Him:  You can say something about golden eagles and we’ll leave it at that.

Me:  I’m saying nothing.

Him:  Quite a lot of jaw bones.  They looked like pan pipes.

Me:  The brighter the sun, the darker the shadows.   BDMTISH!4

Him:  That’s the jellyfish and the sea.

Him:  Do we need to say anything about San Helios?  Is it not bizarre enough?

Me:  Same again next year?

Next:  Something completely different.

2.  For previous visits to the Colony, see here and here.

3.  Photo courtesy of my long-suffering PA.

4.  Meanwhile, in the Village…