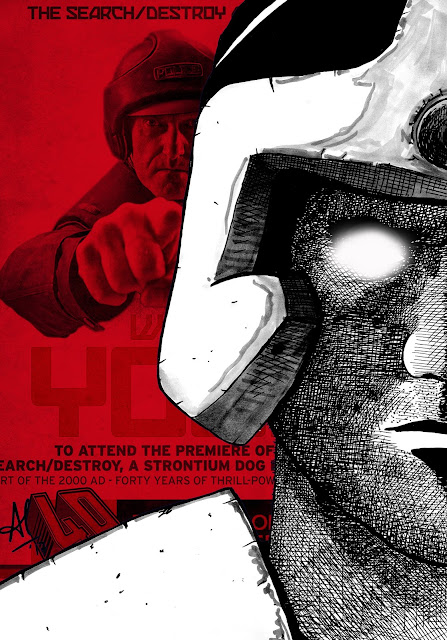 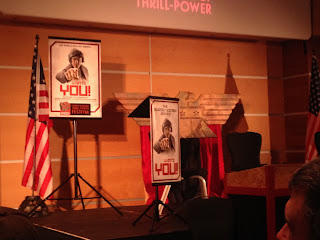 The hall’s rammed.  Standing room only.  Harvey (as worn by Guy Hepworth) takes the lectern.  Galactic Crime Commission recruitment posters raised behind him block out freedom’s flag and justice’s eagle.  Anticipation thickens the air.  Harvey starts talking, introducing the recruitment film that’s about to fill the screen floating above him.  We’re told about ‘diversity targets’ and warned off interacting with stray Gronks.

Then the lights go out.

The film’s cast and crew wait in the dark with the rest of us.  This is an exclusive occasion: first time out in public and a guest of honour at an old friend’s birthday party.  It’s a lot to take in.  Big day all round, to be fair.

Search/Destroy is Steves Green and Sterlacchini’s second cinematic tribute to 2000 AD.  Their first, Judge Minty, went down well with fans, critics and creators alike.  John Wagner described it as his favourite Dredd film at the time and, despite petitions and marches and Facebook campaigns, there hasn’t been one since, so the accolade must still stand.  There’re similarities between the Steves' two films, obviously, but not as many as you’d expect.  Whereas Judge Minty felt like a standalone, Search/Destroy has the air of a pilot to it.  Or a prologue.  Dredd and his world have soaked further into modern culture than Johnny and Wulf, maybe that’s why.  I don’t think so.

Just the facts then.  Search/Destroy is good.  It’s gritty, solid, professional and filled with as much love as Judge Minty was.  The CGI is also better than it has any right to be, it's certainly superior to some recent examples in The Walking Dead and Doctor Who.  Of course, it’s easier to spend longer getting things right when you’re making them for love rather than as components of an industrial machine.  It showed previously, it does so again.  The constraints of being not-for-profit offer greater creative freedom.  The work’s finished when it’s finished, not when the beans run out. 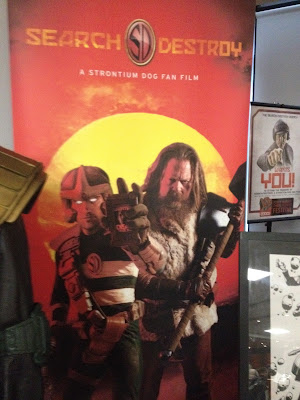 Strontium Dog’s always been a Western, and Search/Destroy honours this.  It’s the universal tale of society’s outcasts hunting society’s outcasts set against a backdrop of galaxies, rather than mesas.  Sand, stand-offs, shoot-outs, stubble, staring: all present and moodily correct.  In contrast to Judge Minty, Search/Destroy isn’t a direct adaptation/extension of an existing story.  There are things you’ve seen before but, unlike a shallow Snyderesque reproduction of cool comic panels without understanding the underlying meaning, the Steves mostly use these moments to help delineate character.  It’s refreshing, to say the least.

Of course, we’re talking a different language here.  Franchises shouldn’t aim at fans because they’ll buy it anyway, to misquote Dez Skinn.  Fan films don’t need to pander to the norms at all, and this, when done well, is their real strength.  Thrilling, undiluted direct hits, pummeling a shared consciousness are always going to be more satisfying, more nourishing, than something that fawns.  Franchises stroke fancheeks with obsequious namedrops, then turn on those same fans, spitting insults if the unnecessary fondling doesn't produce the required amount of jerking-kneed gratitude.1

The casting here’s spot-on.  Matthew Simpson’s Alpha and Kevin Horsham’s Wulf stride solidly out of the strips, bringing a vibe that’s part Reznor-cool and part scary-Scandinavian.  Or something.  It’s certainly dwarf-star heavy.  The wonderful Mr Dehn, Judge Minty himself, is back, batting for evil this innings.  The supporting cast do a grand job and the music kicks arse.

Niggles?  Well, if I had to say something..  A couple of the edits seemed perhaps a nanosecond too late and I was reminded more of Starlord than Tharg.  Both are probably my own fault.

Search/Destroy sets the Strontium Dog universe up excellently and is a worthy additional chapter to the ongoing story of 2000 AD.  The deafening applause that greeted the credits would seem to back this up.  Search/Destroy shares your nostalgia and affection for these characters, rather than simply using them as a distraction while forcing your wallet open and roughly milking you into a filthy, plastic cash bucket.  And, for that reason alone, you owe it your time.
…spread the word (sorry, different strip).
- Steve Green 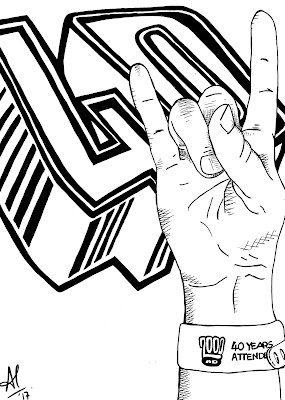