The Daleks' Master Plan: The Feast Of Steven 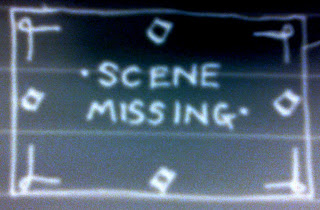 THE DALEKS’ MASTER PLAN:  THE FEAST OF STEVEN
Oddly enough, this entry on what might well be the most bizarre episode of Doctor Who ever is going up on February 29th, a day which the very fabric of everything that makes sense is turn’d ‘pon its head.  Or something.
Sufferin’ sulphane...  Needless to say, it’s (sic) throughout…
Me:  I’ve been looking forward to this for quite some time.  Well, ‘anticipating’ is probably closer to the truth.  It might be crap.
Him:  (shocked) You can’t say that – not on the blog!  Why not just say ‘rubbish’?
Me:  Because it may very well turn out to be a lot worse than ‘rubbish’.
And we’re off on the 1965 Christmas Number.
We recap.  This time round I notice that someone’s taken the proto-Leela comment to heart…
Sara:  Something’s gone wrong.
The Doctor:  What’s the matter, my dear?
Sara:  It’s stopped going up and down.
Steven:  It’s alright.  It means we’ve landed.
The scanner’s still on the blink, there are still dials and the atmosphere’s still poisonous.
We’re presented with a shot of a police station.  And then comes the title card.
Him:  Why did they call it The Feast of Steven?
Me:  Christmas, innit?
It certainly is.  We’re now greeted with drunken policemen singing carols.  It’s like L.A. Confidential is trying to be born – as though some future echo chamber of a televisual Hadron Collider is – Alright, I'll shut up. Sorry.  No it isn’t.  Although, of all the episodes of Doctor Who, this is the one that’s most similar to a James Ellroy story.  Wait and see.
A Sergeant peruses the TARDIS.  Someone’s dumping police boxes now.  Must be Banksy’s grandfather.
Inside the TARDIS the talk has returned to pollution.  The Doctor has decided that he’s by far the best equipped to go outside – probably something to do with the pipe.  Anyway, if he ends up in trouble the others have his permission to pitch in and save him.
Steven:  And how are we to know that something has happened to you?
Me:  “I’ll scream coquettishly.”
The Doctor leaves the TARDIS and meets a policeman.  Disappointingly, he fails to ask the time before popping back inside.  The startled copper and his pal exchange banter, whilst back inside the TARDIS, Sara and the Doctor do likewise.
After a few moments the Doctor leaves again and promptly gets nicked.
Policeman:  Alright, lad – it’s a fair cop.
Me:  “But society’s to blame.”
Inside, the police station is more Trumpton than Sun Hill.  A gentleman is complaining about ruffians “Moving me house”.  After a painful few moments, it turns out it’s actually his greenhouse.
The Doctor is dragged kicking and screaming into the police station (he isn’t) and immediately recognises the Complaining Gardener (he does).
The Doctor:  Haven’t I seen your face somewhere before somewhere?  Yes, of course, I remember now: the marketplace at Jaffa!
Me:  He did.
Him:  Who did?
Me:  The Doctor did.
Him:  See him at Jaffa?
Me:  Yeah.
Him:  In The Crusade?
Me:  Spot on.
Him:  Was he playing someone else or is he just a really old guy?
Me:  Superb.
Steven leaves the TARDIS sneakily.
Deep in the bowels of Newtown Station, chaps with moustaches quiz the Doctor.  Must be C.I.D.  With Wiles and Tosh at the helm there's always the possibility that things'll go all Red Riding any second...
First Moustache:  You mean you’re not English?
The Doctor:  No, good gracious, no.
First Moustache:  Scottish?
The Doctor:  No.
Second Moustache:  Are you Welsh then?
The Doctor:  Ahflflflfflflf – far bigger wave than all that!  Your ideas are too narrow!  Too small!  Too crippled!
First Moustache:  Alright, alright.  What are you then?
The Doctor:  I suppose you might say that I am a citizen of the universe.  And a gentleman to boot.


Steven grabs a spare uniform and impersonates a Scouse police officer.  He finds the room in which the Doctor is being questioned.  After the Doctor has explained what the TARDIS is and how it works a, very sensible, verdict is reached.
PC:  He’s a nutter.
Me:  Barbara’s obviously had some dodgy cheese before retiring.
PC:  I told you, he’s a nutter.
Sara also leaves the TARDIS and bumps straight into a laughing policeman.  Luckily, she refrains from killing him.
Inside the station, Steven wangles the Doctor’s release using the ‘he’s a funny fella’ defence.
Sara manages to assault an officer and drag the gents into the TARDIS, leaving a befuddled policeman in its wake.
Him:  “Too much coffee.  Too much coffee.”
There’s a quick debrief on the TARDIS.  Sara’s fixed the scanner and the Doctor’s managed not to drop the taranium (remember that?).  Steven’s face hasn’t been blown off and he isn’t in a coma either, so that’s good.
Within moments they’ve landed somewhere else.  There’s a scream and everything goes mental.
Him:  They’re in the World of Fiction again.
Me:  You might speak truer than you know.
Our heroes rush from the ship to save Douglas Camfield’s wife who’s about to be sawn in two by a cad with a ‘tache.  Steven starts punching everyone.  Somewhere, a pianist wakes up and tinkling commences.
Him:  What’s with the happy music?
Me:  It’s supposed to be a silent film being filmed.
Him:  Reminds me of Buster Keaton.
Me:  It’s supposed to. 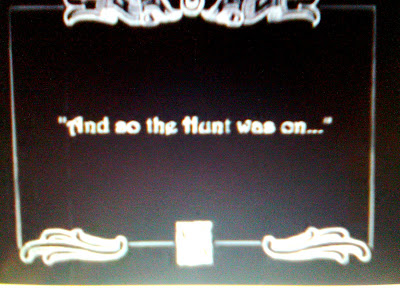 Having spoiled one scene, our heroes scurry to another set, failing to thump Charlie Chaplin on the way.
Inside a tent there’s a Sheikh who seems oddly familiar.
Me:  Tch.  Crowley again.
The scene is interrupted when Al starts mentioning camels without the right amount of chutzpah.  People shout at each other, because that’s always funny.
Sara is spotted and – for no reason that I can fathom – hides in a box.
Steven, still dressed a policeman, is press-ganged into the Keystone Kops.
Him:  It looks like Monty Python!
Me:  With a bit of Marx.
Meanwhile...
Him:  ‘Inside the tent…’
Me:  Brilliant!
Sheikh Crowley announces he’s coming!  He’s coming!  He’s coming on his camel!
Me:  Terry N used to write for Hancock, but he could certainly hide that when he needed to.
The Doctor is cornered by a Director and introduced to an Arabian princess.
The Doctor:  Nonsense, you put some more clothes on child.  Go on!
Him:  Why’s Sara in the box?
Me:  It’s the one thing we’ll never truly understand.
Meanwhile, there’s more shouting.  It’s hilarious.
Him:  Some of these pictures aren’t the best.
Me:  I’m impressed.
The Doctor and Sara are reunited and flee to Wardrobe where they find Steven.
Steven:  Where’ve you been?
Sara:  I don’t know.  But a strange man kept telling me to take my clothes off.
According to a caption, the chase is on.
Him:  Wrong story.
There’s another bad picture4 and then the Doctor meets a comedian
Him:  Does this episode have anything to do with anything?  Because if it has a storyline then I’m certainly not following it.
Me:  It’s just daft filler – it doesn’t count.  Like the new Christmas ones.
Him:  Don’t be mean.  You’ve never made a TV show.
Me:  I have, actually.
Him:  No, you haven’t.
Me:  I have.
Him:  Ok.  What was it?
Me:  Cancelled at the idea stage.  But that still counts.
Him:  Well, then.  I’ve made dozens of TV shows.
Me:  Good lad.
Him:  Was it the planet Mira they were one earlier?  Does that mean ‘mire’?  Oh, of course: Terry Nation wrote it.
Me:  I did crack a gag about that at the time.
Him:  Did you?
Me:  Almost.  I hid it in the words.
Him:  Which ones?
Me:  The ones that were funny in my head.
Him:  So, you didn’t say it?
Me:  If you like.
Him:  Can you just press play?
Me:  Oh – it’s paused.
Not for long.  The comedian turns out to be Bing Crosby (but of course) and then the TARDIS escapes.
Me:  That’s a weird photo.
Sara:  Whatever was that place?
Never mind, Sara, it’s Christmas.  Why not have some of Terry N’s champagne?
Steven:  Way-hey!
The Doctor:  Incidentally, a happy Christmas to all of you at home!
Him:  It wasn’t his fault.  It was scripted.
Me:  It’s no worse than David Tennant giving it, “Are you my mummy”.
Him:  Huh?
Me:  Or the Doctor being able to breathe in space because it’s Christmas.
Him:  When was that?
Me:  Last Christmas.
The Him then insists on watching Jedi Kittens Striking Back for some reason.  Seeing as he can’t stand Star Wars (I know) this never fails to tickle me.  Haven’t seen it?  Here you go:

4.  Robert Jewell, the actor playing the clown, took twenty photos of this episode off the telly according to Richard Molesworth’s Wiped!  Seeing as it was broadcast at twenty-five to seven on Christmas Day, I’m going to hazard a guess that he might have been somewhat refreshed when he did so. 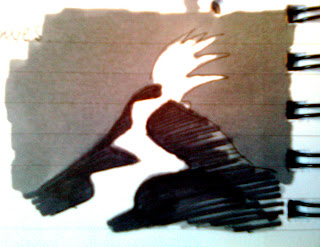