Tell me, Muse, of the man of many devices, who wandered far and wide after he had sacked Troy’s sacred city, and saw the towns of many men and knew their minds.
- Homer 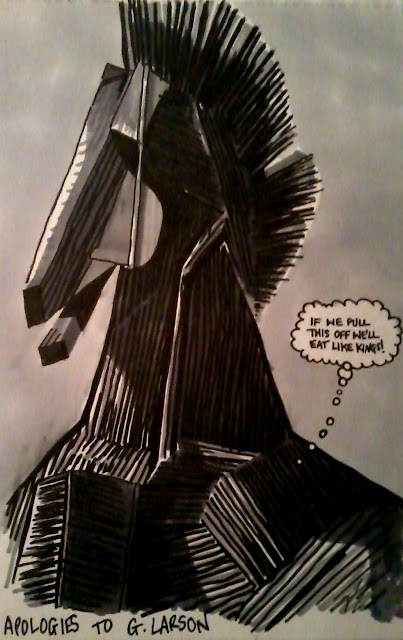 TEMPLE OF SECRETS
Him:  “Temple of Doom”.
Me:  That’s The Aztecs.
Him:  You called it ‘Temple of Doom’.
Me:  I don’t think I did.  Shall we?
Him:  Yeah.
We do.
Him:  So, they don’t have any of this?
Me:  No.
There’s a fight going on between two annoyed chaps – Hector and Achilles.  Unnoticed, the TARDIS materializes behind them.
Him:  The writing baffles me.
Me:  It’s jumped straight in.  Oo – ‘Donald Cotton’.
Parp parp parp goes Humphrey Searle’s musical underlining of the fight.  It’s certainly entertaining.
Me:  It’s already better than Troy.
The Doctor, Vicki and Steven are watching the scrap on the TARDIS telly.  The Doctor isn’t sure where they are, but reckons he spies the handiwork of a Grecian tailor.  To Vicki’s surprise, the Doctor decides to go and ask the combatants for information.
The Doctor:  If you take notice of them, I think they’re doing more talking than they are fighting.
Me:  Ha!
Vicki’s ankle is still sore, so she stays.  Steven is left to guard her.  Hector and Achilles continue shouting at each other.  There’s a sudden rumble of thunder.  Zeus is called upon to intervene.  There’s another rumble of thunder as the Doctor steps out of the TARDIS.  This distracts Hector and Achilles, rather opportunistically, runs him through.
Me:  More blood on the Doctor’s hands.
The Doctor bellows his disappointment.  Achilles reveals himself to the Doctor (who he thinks is Zeus).
Me:  Is that not…?
It isn’t.  The recon has been pieced together with available shots, not all of them from this serial.  Ignore it, we’ll move on.  There’s banter up ahead.
Achilles:  If you had appeared to me in your true form, I would have been truly blinded by your radiance.  It is well known that when you come amongst us, you adopt many different forms.  To Europa you appeared as a wolf, to Leda as a swan, to me, in the guise of an old beggar.
Me:  Ha!  Lovely.
The Doctor decides to masquerade as Zeus.  Achilles takes the Doctor off to meet Agamemnon and have a chat about the last decade the Greeks have spent camped outside Troy.  Steven and Vicki watch this taking place, and suddenly there’s brief off-screen movement.  It doesn’t last long, and then we’re back to photos, starting with a handily-labelled postcard of Troy.  And then, we’re introduced to Odysseus.
Him:  Haven’t I met him?
Me:  Well – that’s a picture of a Roman.
Him:  So Verity Lambert’s gone now?
Me:  Yeah.
Him:  Poor William Hartnell.
Me:  He had a tough third series.
Now that I‘m rewatching this through for the second time, to bash these notes into shape, I can safely say that this story is amazing.  It plays around with narrative in a clever and totally unfair way that almost demands a repeat viewing – which of course, it would never have had.  I think it’s a masterpiece.  But that’s just me.
Odysseus and Achilles indulge in non-playful banter.  Achilles introduces the Doctor as Zeus.  This amuses Odysseus so much he starts off on a four-week long laughing fit.  The Doctor is escorted/abducted to the nearby Greek camp.
Me:  Odysseus seems very cheerful.
Steven and Vicki are moving again, if only briefly.  Steven follows the Doctor.  Agamemnon is feasting with Menalaus.  Oddly, it turns out that Helen isn’t as missed as the siege would leave you to think.  It’s actually a thinly-veiled political opportunity.
Me:  Lovely banter.  Nice performances too.
Achilles enters the tent and explains what he’s been up to and who he’s been meeting.  The Doctor arrives shortly afterwards, led by Odysseus.  He’s not happy.
Me:  “Not Zeus.  Yetaxa.”
Him:  So this is still inside Barbara’s dream?
Me:  Yeah.1
Him:  That doesn’t make much sense: she’s not there.
Me:  She could be dreaming without appearing in her own dream.
Steven approaches the camp and is watched by Cyclops – a spy for Odysseus.  Following sign-language, which doesn’t translate well in an audio copy, Steven is captured.  The Doctor and Steven are reunited and the Doctor plans a miraculous escape.  And then he’s told that his ‘temple’ is missing.
NEXT:  SMALL PROPHET, QUICK RETURN
Him:  That’s a long name.
Me:  It’s a joke.
Him:  Is it?
The credits chitter by.
Him:  “John Wiles”.
Me:  I’m saying nothing.
1. It isn’t.
SMALL PROPHET, QUICK RETURN
We recap.  Once again, it turns out that the TARDIS has been nicked.
Me:  Zarbi, I reckon.
The tracks lead off in the direction of Troy.  Agamemnon is beginning to be swayed by Odysseus’ “They’re spies!” line of reasoning.  The Doctor and Steven decide to tell Odysseus the truth.  Meanwhile, in Troy, trumpets are trumping and we meet Paris and King Priam. 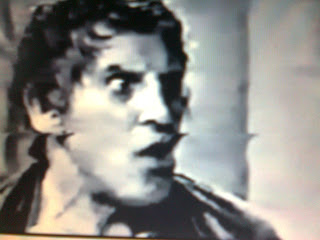 Me:  Played by Noel Fielding.
Paris shows Priam the TARDIS.  His sister, Cassandra, enters.
Him:  Lady Cassandra?
Me:  She’s a different Cassandra.
Him:  “Moisturise me!”
Paris wants to put the TARDIS in the temple.  No-one else thinks it’s a great idea.  Paris blusters.
Me:  He’s brilliant.  It’s a modern take on it.
Cassandra has had a dream that the Greeks had left a gift that spewed forth soldiers at night bringing the siege of Troy to an unsatisfactory conclusion for the Trojans.  The TARDIS doors can’t be opened.  There’s a sudden burst of movement as Vicki watches the Trojans plan to burn the TARDIS as a sacrifice.
Him:  I wonder where the scanner is.
The Doctor and Steven have just finished telling Odysseus about the last couple of years and the brief burst of movement ends.  Odysseus is very angry – he’s even stopped laughing.  It’s quite frightening.  He releases them and there’s a sudden burst of moving William Hartnell.  Odysseus gives the Doctor two days to end the siege of Troy.  The TARDIS barbecue preparation is coming along nicely.  Vicki leaves the TARDIS at the moment Cassandra asks the gods to show them a sign.  Vicki says she’s from the future.  Paris and Cassandra make a superb double-act.
Me:  Lovely.
Vicki walks to Priam who asks her name.  ‘Vicki’ sounds a bit weird, so he rechristens her Cressida.
Me:  Ah!  Troilus and Cressida.  Mix me a myth.
Cassandra:  She will bring nothing but doom, death and disaster.
Me:  Worryingly, Cassandra’s a natural.  How much of the history of this do you know?
Him:  None.
Me:  None? I thought we’d gone over Greek myths?
Him:  No.
Me:  I’m sure we did.  Oh well.  It’s probably better if you don’t know too much about – well…  Vicki’s from the future – and so’re we.  Stuff isn’t going to happen because it’s already happened.
Him:  Yeah.
Me:  Does that make sense?
Him:  Yeah.
Me:  It’s like – when you watch a film with a twist in it for the first time, the twist’s a surprise.  If you watch the film again though, then it’s a slightly different story because you know what’s going to happen and you bring that knowledge with you.  It gives you an advantage over the characters.  Does that make sense?
Him:  Uh-huh.
Me:  Vicki’s in a lot of trouble. It’s almost a comedy now but it’s going to get darker – it has to – and there’s no way anyone can really stop it.  Fixed points and all that.
Him:  Yup.
The Doctor and Steven are discussing their knotty problem.  The Doctor reveals he’s avoiding the idea of the wooden horse as it’s obviously a load of fictional nonsense.
Me:  God, that’s clever.
A messenger suddenly arrives.  He looks awful familiar. 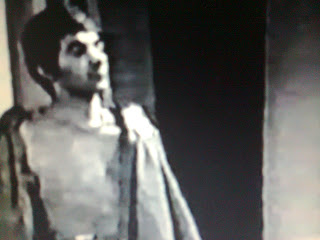 Him:  It’s Rowan Atkinson!
The messenger reveals that Paris has offered to scrap with a Greek.  Steven offers to become a prisoner of the Trojans and try and find where Vicki is and remove her from Troy before it gets raided.  As he leaves, the Doctor continues to offer suggestions.  A flying machine, perhaps?  Later, Paris confronts Steven – who introduces himself as Diomede.
Me:  Oh no.
Once again, there’s a lot of talking.  It’s magnificent.
Me:  He’s brilliant!  Paris is in a different show altogether.
Him:  It’s a comedy, remember?
Me:  Whatever programme Paris is in certainly is.  Something by Wodehouse, maybe?
The fight finishes.
Steven:  I yield
Paris:  Beg y’pardon?
Steven surrenders and I rewind this bit because it’s amazing.
Me:  Listen to this!
Paris:  Come, Dog!
Steven points the way.
Paris:  Oh, yes.
Already in Troy, Vicki eats peaches with King Priam.  Talk turns to horses, which the Trojans worship and Vicki becomes subdued.
Me:  See what I mean?
Him:  Uh huh.
Vicki and Troilus are introduced to each other.  Paris and Steven enter - Cassandra lurks in the background.  The plans are all coming together when…
Vicki:  Steven!
Steven:  Vicki!
Me:  Oh no – oh no!
Cassandra:  What more proof do you need that’s she a spy?  Guards!  Kill her!  Kill both of them!
NEXT:  DEATH OF A SPY
Me:  Wow.
Him:  So – Katarina’s from the past then?
Me:  Yeah.
Him:  Is she from this story, or is she from The Daleks’ Master Plan?
Me:  This one.
Him:  Oh.
Me:  Am I more into this one than you are?
Him:  Very much so.  I can’t even hear what they’re saying.
Me:  “ChiswICK!  Fresh horSES!”
Him:  “WIBBSEY!”
Me:  This is really good.  I had no idea it was this good.
Him:  Did you not?
Me:  No.
DEATH OF A SPY
We recap.  Paris interferes and Cassandra kicks off.  There’s a discussion about Paris’ new prisoner, Diomede.
Him:  ‘Dyoni’?  Wasn’t that the name of the tree lady?
Me:  I’m impressed.
Steven continues bluffing.  Vicki offers to explain, but the two of our heroes are in a very tricky position.  They are taken away to the dungeons.  Elsewhere, the Doctor and Odysseus are in conflab.  The Doctor suggests an aeroplane.  Odysseus points out that his son makes parchment darts.  The Doctor attempts to persuade Odysseus to build catapaults.  Odysseus suggests this sounds more like a vulgar oath.  The Doctor asks Odysseus what happens when strips of ox-hide are dried.
Odysseus:  It begins to smell.
Me:  Ha!  This script’s beautiful.
Vicki and Steven are chatting in the dungeons.
Him:  That’s an amazing picture of Vicki. 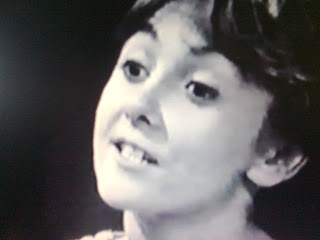 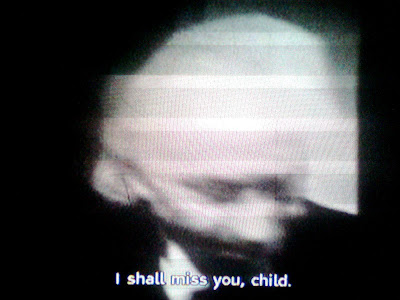 NEXT:  THE NIGHTMARE BEGINS
Me:  Wow.  Thoughts?


Him:  Vicki’s gone.  I liked Vicki.
Me:  Yeah, Maureen O’Brien was really good.  The tone of that story changes utterly in the last episode.  I found it quite shocking actually.
Him:  Yes, but I was paying more attention to Vicki leaving.  When the TARDIS took off, I didn’t hear Vicki saying she wanted to stay and I just thought that the Doctor had forgotten her.  Again.
Me:  He had to go though.  Odysseus was there and they couldn’t wait.
Him:  But he didn’t forget her.  She said at some point that she wanted to stay.
Me:  Maybe it was when Steven was being kebabed.
Him:  Maybe.  And Katarina’s not in it for long – how many episodes of The Daleks’ Master Plan until she dies her tragic airlock death?
Me:  The bit they showed on Blue Peter…
Him:  Yes!
Me:  Do you want me to tell you, or would you rather it came as a surprise?
Him:  Well, it’s not going to come as that much of a surprise is it?  Episode two?
Me:  No.
Him:  Episode one?
Me:  No.
Him:  The Myth Makers episode four?
Me:  No.
Him:  An Unearthly Child?
Me:  Yup.
Him:  Really?
Me:  No.