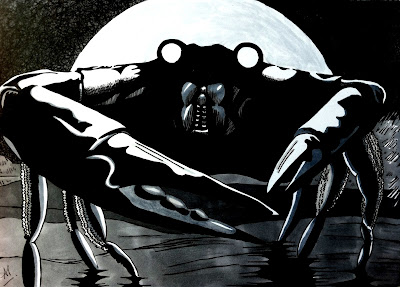 Me:  That music certainly wouldn’t have helped.

Jamie’s hearing an evil voice, dripping honeyed persuasion in his ears and making a right mess of his pillow,  he awakens with a panicked start.  Jamie can’t stir Ben.

Polly’s in a separate rest cubicle, but the voice is being piped through even there.

Posh Macra (in disguise):  YOU WILL NOT RESIST THE SLEEPING GAS!

The Doctor enters and checks on Polly.

Colin Baker:  The Doctor tried not to disturb her…

Me:  “…but even he had to admit, his recorder habit was getting out of hand.”

The Doctor fiddles around with a small bit of wire that’s sticking out of the wall.  Before long it’s exploded and Polly’s awake.  The Doctor’s realised that advice is being fed to the unconscious minds of the dreamers.

Him:  Isn’t that illegal?

Me:  It’s programming in a way.  Very The Prisoner.5

The Doctor:  I want you to forget everything that you’ve been dreaming.

And then the music goes mad.  Again.

The Him disagrees and performs all the different variations of the Mario Snuffs It Theme to show why this is.

The Doctor rushes to check on Ben and Jamie, Polly gets caught up in the slipstream.  It looks like it’s too late for Ben – even his accent’s changed its mind.

Jamie’s all for leaving Ben and running off.  Ola arrives and arrests the Doctor for Malicious Damage.

Elsewhere, Medok’s indoctrination continues, overseen by Pilot.  It doesn’t seem to be working. Glumly, Pilot decides that Medok’ll have to be sent to do some mining.

A call comes through and Pilot leaves to see what the Doctor’s done this time. Polly and Ben have a bit of a row, and then Polly storms off.  Ben follows her outside.  The weird noises are back.  Ben grabs hold of Polly – she sees something, screams and there’s:

Him:  Must’ve been too scary.

Don’t settle yet, there’s another one.

And even more movement, but this time with added doubt as Polly falls between a couple of claws and fails to be able to stand up.

Ben and Polly try to escape.

EPISODE FOUR
Colony Trumpets:  PARPY PARP PARP PARP
Announcer:  This is BBC 1.
Me:  Ah.  I think it’s a johnnyfanboy conceit.
The Stealth Macra ‘pounces’ on Jamie.
Back in the control room, the Doctor continues his tamperage.  Polly’s fretting, but on the plus side, isn't offering to whip up a warm beverage to boost everyone’s spirits.
Polly:  What’ll be happening to Jamie now?
Me:  “It’s laying eggs in him as we speak.”
There’s some flummery about pressure to distract us and build tension.
Me:  Any thoughts on Polly’s hair?
Him:  Makes her look like Dodo.
Me:  Like she’s being written out?
Him:  Like she’s brunette.
The Him sighs.
The Doctor’s tapping pipes and running through numbers.
Me:  Maths.  Urgh.
Him:  Oo, maths.
The Doctor manages to disrupt the pressure and send a blast of fresh, Highlander-invigorating air blowing down the shaft.
The Doctor:  Confusion is best left to the experts.
Me:  Arf!
With the change in air to gas ratio, Jamie manages to gain the upper hand.
Although the Doctor’s sealed the control room door, Ola’s guards are seeing to it.  The Doctor and Polly run through another door and wedge it shut.  There’s a lull.  And a lot of pipes.
Polly:  Doctor, I think these are the pipes that carried the poisonous gas.
The Doctor suggests that they follow them, and see what secrets are revealed.
The Doctor:  Come along, Polly.  I’m sure there’s no need to be afraid… Well, I think there’s no need to be afraid.  Oh, come on, let’s find out.
Us:  Ah!
Jamie, meanwhile, has found a miracle of nature.
Me:  It's a web spun by an insect crab.
On the other side of the web, Jamie finds a door and makes his way through.  There’s a party taking place.  Or a rehearsal.
Me:  Jamie’s stumbled upon the Village’s pack of charity muggers.
Him:  ‘And we must obey’?
Jamie gets mistaken for a dancer.  Spotting the guards taking an interest in him, he decides to try and audition for the Dance Final.  The dance co-ordinators are after something very specific from Jamie.
Me:  Umm…
Pause.
Jamie:  ‘Gay and cheerful’?
That’s language in action for you, personally I’m more worried about what the McCrimmon lad’s about to try and get away with.  It’s tense.
Here goes…
Him:  I wish this moved.  It’d be good if this did move because that’d mean it was-
Suddenly, it moves.
Him:  -OH MY GOD!  IT IS MOVING!  THAT MEANS THIS WAS TOO SCARY FOR AUSTRALIA!
Of course, it’s not terrifying footage of Jamie dancing the Highland Fling, but he manages to escape, so hurrumble for that.
Colin Baker:  But Jamie had flung himself straight into the guards.
Me:  Well done, Colin.
And Ola.  Oh dear.  Jamie is tied up.
The Doctor and Polly have found the source of the voice.  They sneak up to a porthole and peek through.
Me:  It’s the Rills!
Colin Baker:  They saw one of the Macra inhaling the gas..
Him:  ‘Inhaling the dead’?
Me:  ‘Inhaling the gas.’
Him:  Phew.  I was beginning to wonder why this wasn’t moving…
Me:  Notice anything about the Posh Macra?
Him:  Apart from the bow tie?
Me:  Ha!  Cool.
Him:  “I’m a Macra now.  Macras are cool.”
Me:  Ha!
The Doctor:  They’re like the germs in the human body.
Him:  They’re big bacteria now.
Me:  German insect crabs.
Him:  Why German?  Oh.  Alright, I get it.  That wasn’t very funny.
Me:  Thanks.  I’m riding this humourless losing streak right into the wall.
The Doctor begins tampering with more pipes, and then the decision is taken to show Pilot who they’ve found.
Ola’s shown Jamie to Pilot and announced how fed up he's become with the way everyone criticises his work.
Me:  ‘The Running of the Pits’ was an unsuccessful West Country folk tradition.  Participants would often die of boredom until the round cheese was introduced.
The Doctor arrives and persuades Pilot to follow him.
There’s a very stressed message from the Posh Macra.  Pilot ignores it.  Ola isn’t happy.
Pilot:  I don’t know why I trust you, Doctor.
The Doctor:  Perhaps it’s because I’ve got an honest face.
Me:  Lovely.
Posh Macra:  THIS IS A HAPPY COLONY!  ALL MUST OBEY!!
The Posh Macra is revealed, in all its glorious glory.
Him:  Oh!  It’s white.  And it’s got a top hat.
Pilot:  What are they, Doctor?  I mean, some monstrous form of bacteria?  Insects?  Or what?
Him:  They’re not insects.
Pilot vows to destroy the Macra.
Elsewhere, Ola’s been promoted.
Pilot:  Ola!  The colony’s in the hands of grotesque insects!
Him:  THEY’RE NOT INSECTS!
And they haven’t got hands.
Anyway, Ola’s not throwing away his promotion for anyone.  He locks our heroes and the Pilot  in a room.  Ola is told to leave the area.
Posh Macra:  IT WILL TAKE PRECISELY FOUR MINUTES AND THEN IT WILL BE SAFE FOR EVERYONE TO RETURN TO WORK!
Him:  Oh.  Sinister.
The gassing of our chums begins.  The Posh Macra delivers a commentary in its syrupy voice.
Ben, who’s okay now, appears at the door.  The Doctor offers instructions.
Me:  “There must be a fulcrum release lever or something.”
Ben follows the Doctor’s instructions and begins to build the pressure.
The Posh Macra is stressing itself toward an aneurysm.
Ben:  Oh, shut up!
Posh Macra:  BANG!
Suddenly, everyone’s dancing.  It all wraps up surprisingly quickly again.  Pilot thanks our chums, announces a Bank Holiday to be named after them, with competitions and prizes and a trophy.
Me:  The…?
Him:  That’s not what he said.
Him:  “I would like a hat like that.”
Me:  Mmmmm.
Our heroes leave the colony through the medium of dance.
Him:  What’s up with Jamie?
Me:  “Send… more… dancing… girls…"
Credits!
Me:  Righto.  What’d you think?
Him:  It was alright.
Me:  Yeah.
Announcer:  Happy sleep time everybody.
Me:  Whoah!
NEXT:  THE CHAMELEONS

1.  We’ve taken to visiting a haunted Victorian Music Hall on Saturdays – well, why not?  In a glorious confirmation of either synchronicity, luck, the Library Angel or a need to desperately see patterns in things that aren’t there,2 serendipitous Doctor Who merchandise has become a theme of these visits.  The first week went a bit like this:

The Me and the Him’d arranged to meet up with a duo of Natty Choristers and promotionally paper shops3 with informative and educational leaflets.  On the finishing lap of the circuit we’d worked out we ended up being diverted by a Steampunk Tobacconist into a ghost-sodden old building, stained with the after-effects of applause and full of cultural artefacts that must be worth at least eighteen times more than you’d think.  And lots and lots of Doctor Who stuff.
In fairness, there was a comic mart taking place, so this isn’t half as surprising as I’m bluffing it up to be – but I won’t tell anyone if you don’t.  The upshot was finding the first ten issues of the Marvel Doctor Who comic that wasn’t this one, although this one was there: 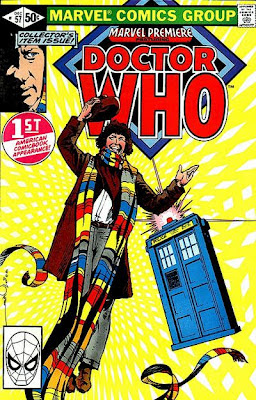 And then the history goes mad, so I’ll skip on and say that when we ventured in for the second visit, we found four videos: The Pertwee Years, The Colin Baker Years, Cybermen – The Early Years and the Baggsian Doctors documentary.  Hence, Colin Baker turning up unexpectedly.4

2.  Turns out it’s Man.
3.  I should add that I’m being vague on purpose.  I don’t have to write like this.
4.  It’s been said that authors often end up meeting their characters in real life.  It makes sense, I guess, and kind of happened to me recently.  Someone I’ve made up appeared in front of me but kept turning and turning and matching my attempts to see if it really was them (which it couldn’t be, because that’s insane) and then suddenly bolted off at full pelt.  It was a mad moment in at least three ways.
5.  In July 2005 I found myself needing employment pretty much instantly.  I ended up joining a company that would sent you out, laden with tat to flog to punters in pubs and shops.  The morning warm up session consisted of the person who took your profits telling you what a winner you were, at maximum volume.  How lucky you were to be working for the company in question was also mentioned.  Following this there was lots of “I’m a winner!” type shouting, group hugging and other unsavoury practises that I can’t go into as I need a lawyer to check through my accusations first.   It was like being trapped in Charlie Sheen’s bathroom, I imagine.
Anyway, the whole thing was based on creepy psychological programming techniques which made me feel massively uncomfortable.  As did flogging sensorite to pensioners.
I lasted two days.
Posted by Al at 00:23