Killers of the Dark 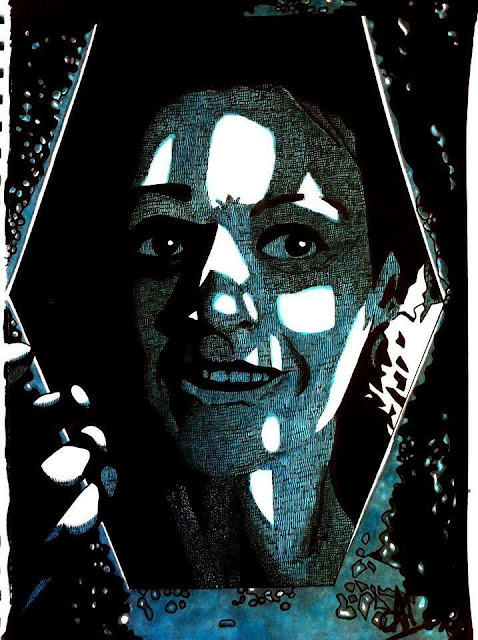 
There’s a Leylandii at the head of the garden.  It’s totally disproportionate and looks like it was planted by Zeus – I guess He must have hated our neighbours.  More on this in a mo.

It’s been cold recently – you might have mentioned it – and so, yesterday morning, I was in the garden refilling my fat balls (hoping to attract some great tits) when I noticed a kerfuffle in the bush.  Under the Leylandii you understand.

I wandered up to the twitching twigs next to someone else’s shed and tried to work out what was going on.  After some squinting I could see that the odd chiaroscuro film noir thang flickering through the woody caged fumble was in fact the most natural of things: one magpie stabbing another's eyes out.  Tucked away in the dead orange-Xmas-tree-lining at my feet a neighbours cat skulked.  It was a beautiful cat – long-haired and dark - and wasn’t going anywhere, no matter how much I hissed at it.

The attacking magpie was quacking like a duck a-la-demi-monde, whilst its quarry made noises that made me think – being a tree-hugging sentimentalist as I am – that it was a fallen adolescent.  The obvious scenario – durr – was that this young ‘un had fallen from the nest and the chap who appeared to be attempting a shanking was, in fact, being parental and trying to encourage an escape.  Both of them shut up when the cat moved so, yeah – it’s the only explanation that fits all the facts.

Then there’s two of the neighbour’s cats there.  Heads down and hunting.

We fill the novelty sonic screwdriver with water and spray them away – freak out the chap with the laminate, flogging boilers: “Nah, mate.  I’ve got one.” – scare off the stabby magpie with his beaky shiv, and lose a morning watching a wounded creature trapped in a cage of twigs, slightly beyond reach.  Its wings didn’t seem to be working, its eye had gone, and the back of its neck was matted and red.

We came in when it started raining.

The Hivemind told me to get water, a box, bird-food, bandages and bedding together (just in case).  In-between chapters of Skyline (so bad it’s not even funny – and that’s saying something) I checked the window for updates.

Two magpies in the garden, one standing slightly next to – but mostly on top of – the other, looking bored and pecking it to death.

I grabbed the fallen magpie, wrapped it in an ancient t-shirt and put it in an old box freshly lined with Metro.  We gave it a choice of water, fruity nibbles, table and feeder mix and left it to recover.

We checked on the magpie every thirty minutes.  To start with the bird was totally still but breathing rapidly.  Later, it had moved a little and seemed to have eaten some food.  Later still it was looking about and flexing slightly.

And then it was dead and cold on its side.

So we buried it next to the ‘TARDIS’.

None of this means anything.
Posted by Al at 11:43

Email ThisBlogThis!Share to TwitterShare to FacebookShare to Pinterest
Labels: Nonsense

Me: That's nature for you, wilfully off-message and horrific. Tch. Glad you liked the pic.