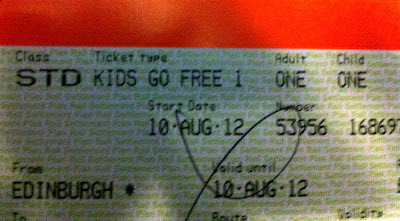 Not a shred of evidence exists in favour of the idea that life is serious.
- Brendan Gill

It is easy to become a father, but very difficult to be a father.
-  Wilhelm Busch 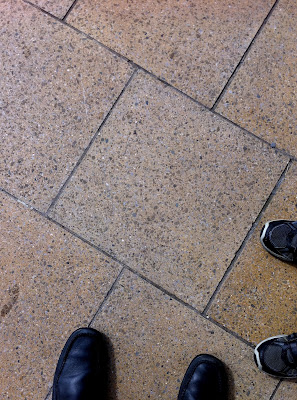 Seeing as you’ve (both) been so patient, here’s a present:  “Every old sock…”

Me:  Do you want another shot at introducing this entry? 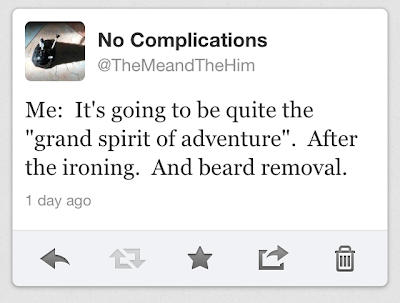 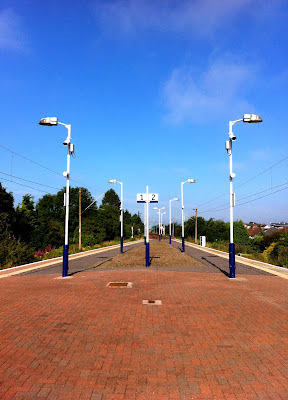 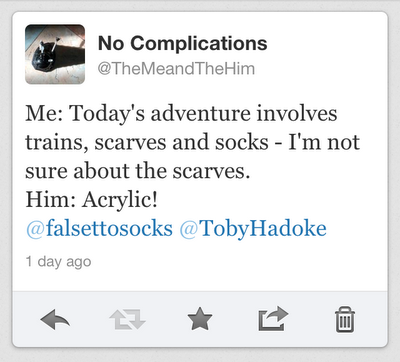 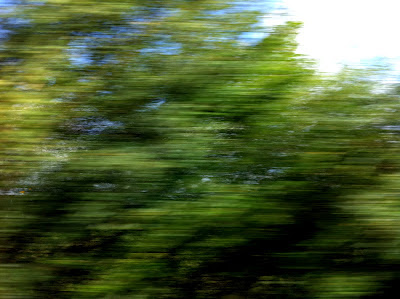 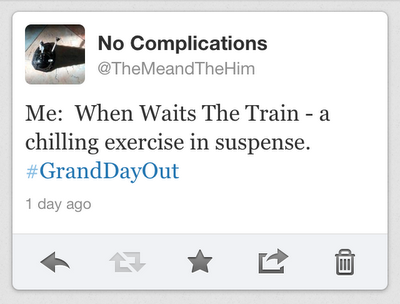 Me:  Can you remember why I was making up titles for travel-horror films?

Me:  It was because we’d waited a bit longer for the price on the train tickets to drop from Are-You-Insane to Almost-Manageable.  Which is an interesting pricing structure.  Because of this we were cutting it a bit fine and I was worried that we’d be late for the first show.  And then the train stopped.

Me:  No, it stopped before that, but you didn’t notice because you were distracted by trying not to re-enact The Vomitarium, which we’ll get to in a bit.

Him:  I wasn’t eating people!

Me:  That would be wrong, of course.  Anyway, after we got in to Waverley – which I’m sure is a paddle steamer-

Me:  Aye.  Umm…  Actually, we saw the Waverley when we were on holiday.  Y’know?  The last entry.

Him:  It sounds like a nice way of saying ‘pickled onion’.

Me:  Okay.  I was trying to invoke aspects of my childhood here.

Me:  Not when it’s Monster Munch.  The – where was I?  Oh, that’s right.  The Waverley used to stop off at the ruined pier that served as the main attraction to the estuary-side town I was semi-based in.  So I used to see it sometimes and…

Me:  That wasn’t worth the wait.  Right.  We ran up the hill toward the Gilded Balloon and… Me:  We were cutting it so fine that I thought we’d never get a seat for this, so I was amazed that we managed to get two in the front row.

Me:  Was it weird, seeing them live?

Him:  We were at the far side of the front row.  That’s why we got the seats.

Me:  Looked fine to me.  Talk us through it.

Him:  I don’t have the script.

Me:  Go on your memory.  Without giving anything away for anyone who’s yet to see it.

Him:  The ticket was red.

Me:  Right.  And?  I’m guessing that wasn’t your favourite part of the show-

Him:  Doesn’t give anything away.

Me:  Fair enough.  Was it what you were expecting?

Him:  I was expecting a grey ticket.

Me:  AAAARGH!  You were laughing an awful lot.

Him:  It was a very funny colour of ticket.

Me:  How many stars would you give the ticket?

Him:  I’ve talked about the ticket.  What did you think of the show?

Me:  I thought it was astoundingly confident, given that it’s the first family show the Socks have undertaken.  There was an almost tangible energy there.  Yeah.  Loved it.  I’d go again.

Me:  It had comfort and warmth.  Reassuring.  But also spiky.  In a nice way.  Danger socks.   And then we met them afterwards.

Me:  And they were lovely.  Even let you shake them by the head.  Quite a moment. 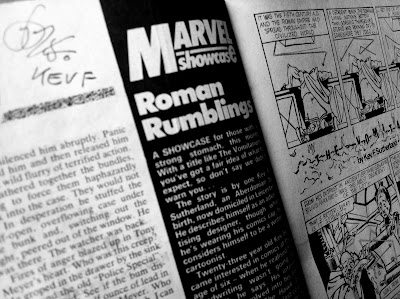 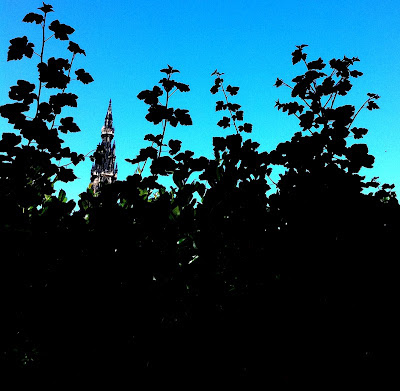 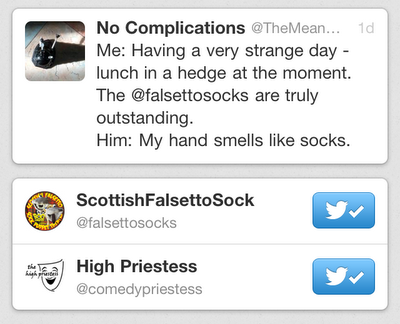 Me:  It was after we got out of the hedge that we bumped into Mr and Mrs Clarke wasn’t it?

Me:  I know.  Anyway, we’d walked back up through Fleshmarket Close and onto the Royal Mile where we bumped straight into the wonderful Mr and Mrs Clarke, old acquaintances of mine.  Which was mad.  It must’ve been nearly ten years since I last saw them.

Me:  Well, you hadn’t met them before.  I was already having a pretty odd day, and this upped the ante a bit more.

Him:  I don’t remember you tripping innocent women.

Me:  Ha!  So, after this bizarre left-turn into Memory Strasse, we were on to the second show of the day.  Toby Hadoke’s My Stepson Stole My Sonic Screwdriver. 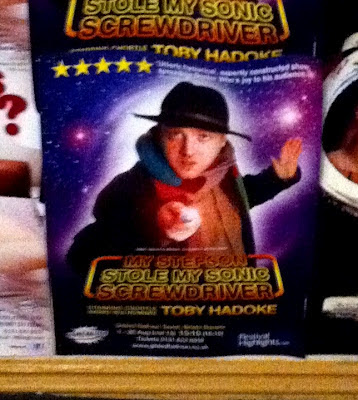 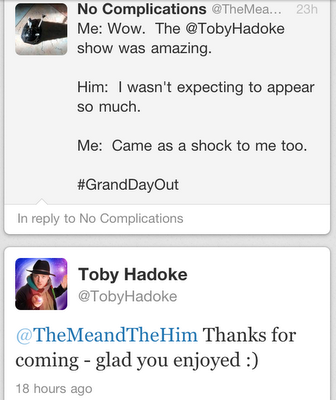 Me:  We should probably explain a little bit about what actually happened here.

Me:  Well, seeing as it was wiped we probably should.  I don’t think copies are being bicycled between Malta and Hong Kong.

Him:  The ticket was also red.

Me:  Okay.  We’ll avoid all spoilers.  I was thinking more about explaining how you became an element of the show.

Him:  But that’s a lost episode though – so we’ll have to create a reconstruction of it, using the photos we didn’t take and the sound we didn’t record and try it that way.

Me:  Right.  We were sat in the front row again.

Him:  The opposite end this time.

Me:  Yup.  And following a spoken introduction that gave me goose-bumps, the show began.  We’d listened to the last one, Moths Ate My Doctor Who Scarf, the night before as a refresher –

Him:  No, because you didn’t need to have heard that to understand the show.

Me:  You got spotted pretty quickly.

Him:  Very quickly, but that’s because we were up the front.

Me:  Yeah.  I thought it was great the way Mr Hadoke used you as a confidant for the more fan-based Doctor Who comments.

Him:  And he might just have thought that I’d been dragged along, and that I didn’t know that much about the show.

Me:  Which sort of made it work on other levels just for us, because I knew straight off that you got the references to Meglos and The Chase, and that the name of…  Well, I don’t want to spoil anything, but –

Him:  Oh, you mean ‘Jacqueline Hill’.

Me:  Yeah.  It was great.  And then he took the time to meet us afterwards.

Me:  And was such a genuine, lovely bloke.

Him:  I don’t like the word.  Sounds like the name a six-year-old would give to a dog.

Me:  It was really good.  Excellent show.  Fatherhood became a weird theme for the whole day.  Well, for me it did.  How many stars would you give My Stepson Stole My Sonic Screwdriver? 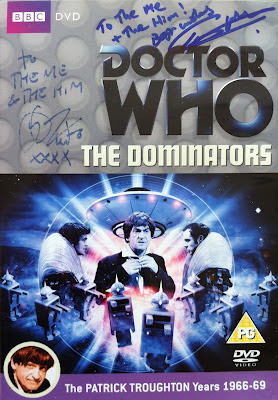 YELLOW FEVER AND HOW TO CURE IT 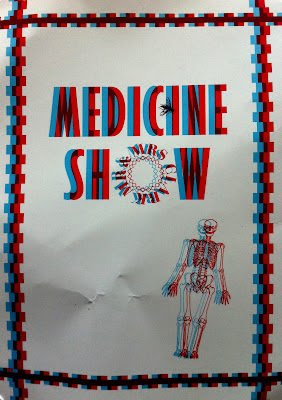 Me:  And, so we’re onto the third, and final, show of the day.  Keeping the Doctor Who connection going, Mrs Clark was in The Girl In The Fireplace as a Clockwork Orange.

Him:  What the hell is a ‘Clockwork Orange’?  Are you just very hungry?

Him:  What does ‘Burgess’ mean?

Him:  Why do you have a kettle of fish?

Me:  So, apart from me being tied up on stage, what do you remember about this?

Him:  The Slate of Life.

Me:  And the banana.

Him:  And the ticket wasn’t red.  It was white.  With drawings.

Me:  They were great.  Five stars.

Me:  By this point, I was so hot and sweaty and knackered that I might as well have caught the diet form of malaria.  You were feeling a bit tired too.  And we still had to catch the train to where the curry was waiting. 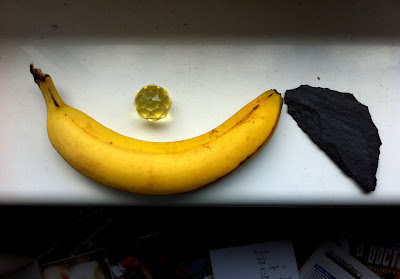 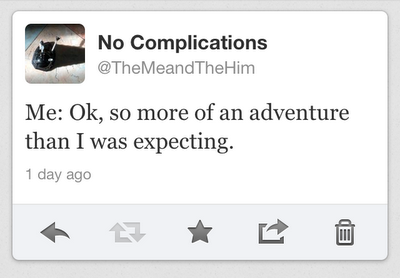 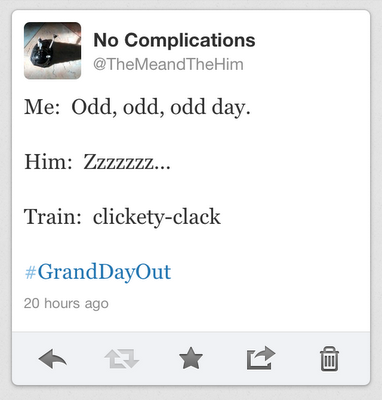 I was having such a good time during that mad, hot, hilly and Who-sodden day, I kept forgetting to tell people- 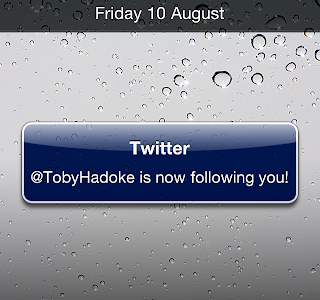 Next:  The Faceless Ones2

1.  If not the best, then certainly the weirdest.  But I didn’t feel that ‘weirdest’ climaxed triumphantly enough.