There are only three songs in all the world, one’s about love, one’s about death and the other one’s about Kate Bush.  Also, there are only seven stories – so it shouldn’t come as a great surprise that characters and locations overlap from time to time.

Many of us will age and expand in an occasional grocery shop near to the sea – this doesn’t mean we’ll all end up believing that the Doctor’s probably real.  Dozens of young people gleefully told a crumpled careers advisor they wanted to spend their taxable years writing comics (not at the same time, that’s the plot to the eighth story) but it doesn’t mean that they were all using the opportunity to vent hormonal arrogance rebelling against something loathed as a result of circumstance.  There are more stories in which the young protagonist has read an entire library - Moonshadow is one that leaps to mind - than there are bootleg Hawkwind albums.  But only just.

There were two sets of directionally-designated stairs in the school’s main building, and at the bottom of the ‘escape’ set was a dimly-lit, concrete cave created by the overhanging steps.  The Payphone itself clung to the cave wall next to the reprographics room and the air there always tasted inky.

School itself was tedious and vicious in roughly equal amounts and got in the way of reading.  Back then we weren’t riding dinosaurs to school because of a noble sacrifice I’d made by accident.  On the whole this had been forgotten, but that didn’t mean I’d suddenly become popular.  Music came later, but that was really just a way of wandering off-script and into a paranoid tangle of improvisation and apparent peer-approval, triggered by the realisation that you didn’t actually need any musical ability to be a vocalist.

Every character in this interactive version of School Fun had their different ways of getting through the compulsory quagmire of comprehensive education: some would look for open windows; others imposed a Python-based reading to create a bearable everyday surreality; some pushed the boundaries of social acceptability and others just got on with it, or enjoyed sport.

Computers were still mostly a madman’s manufactured dream, oozing from the BBC’s Dystopian R&D Department.  Somehow, real world proto-cheat-codes had evolved - later on they would mutate into the symbolic, species-crossing endoparasite we all love, but we don’t need to go into that here.  These were simple times of great potential when everything was either meat, plastic, shellac, paper or metal.  Reality was still up for grabs and someone - it was never clear who, but I always thought that wearing a Judge Death badge was a bit risky – had discovered that by inputting a secret code into any normal payphone you could make it ring forever.

One of the minor characters in my personal adventure is about to make his first appearance, he’s just changing out of his punk journalist disguise at the moment.  While we’re waiting for him to get ready, I thought we might have a quick chat about rivers and time.

There’s something about the water cycle that always appealed to me.  I like the way that water just keeps going round and around like energy and stories.  It might change size and shape and location but it always comes back to the original combination of hydrogen and oxygen eventually.  I also like the idea that Glasgow’s main export, after superheroes, is the same stuff that splashed all over the dinosaurs’ feathers.  Until it reminds me that I’m responsible for wiping them out in the first place and that makes me sad, so I’ll try and conjure an analogy about streams being tributaries of story leading to a river but that won’t work so I’ll shift angles and try to funnel water into a metaphor for our individual narratives and-

Mate, I’m dying out here.  Can you hurry up and get that jacket on?

There was something wrong with the Payphone in the cave.  All through lunchtime the rumours had crawled from inmate to inmate like lice.  By the time they’d reached me, the nuisance novelty had worn skin-thin for the giggling group clustered in the shelter of the escape stairs.  I arrived just as the end-of-lunch bell rang.  The crowd crumbled, falling back to registration classes in preparation for the afternoon’s grey trudge toward the nineties.

The sixth-former with the Judge Death badge finished his call, saw me standing there and held the handset toward me.  His head tilted slightly and he grinned.

“Yeah, cheers.” I took hold of the handset and tried not to appear too Alzarian.  “What do I do?”

“Press the ‘next call’ button, wait for the dial tone and then just ring – when you’re finished, press ‘next call’ again – just don’t hang up.”  He was looking very pleased with himself.

“It’s knackered.  The longer you stay on the call the more credit you build up.”
And with that he left me holding a hacked telephone, standing in a cave that was going to be empty for the next fifteen minutes.

With great power comes great responsibility, as no-one ever said ever.  So, who could I call then?

As a result of writing letters to people who may never have really existed, I’d managed to start a bit of a correspondence with some of the gods who made British comics happen, and because of this had a selection of secret numbers written in the back of the notebook I carried everywhere.  I looked through the stringy digits, trying to decide which combination to summon.  By now I was burning up, my cheeks stang and flop-sweat was spotting the shaking notebook.

In the end I settled on the code attached to the most obscure name, more of a hemi-demi-semi-god at this point in psychogeology and therefore the one least likely to shout my face off.  Repeating the digit blocks of code out loud I input them firmly, one after the other, into the clay of the future.

The queue’s like a still summer river, all gentle expectant bubbling and trickling susurrations.  I’m bobbing in the tide with my PA, buoyed up by the contents of my bag.  Someone opens the door and the river flows forward smoothly, undulating around the square named after King George III’s favourite ladies and sometimes a Cure single.  The river slowly becomes a lake; we wash up in the shallow end.

For the next sixty minutes I’m taken on a guided tour of everything I got up to when I was meant to be watching Doctor Who.  Black orchids; shocks from the future; the unexpected autograph on the twentieth Redfox; M*****man’s sudden appearance in my hometown, the black screaming horror that can be packed into twenty-four hours; dreaming my way through college and into music via London Below; sharing other mothers and mirrors that aren’t with the Him.  And I remember that sweat tastes like the ocean and tears at the same time, regardless of whether it’s honest or shameful.

The lockgates open again after a hour and the lake gushes back out to form a new river that’s made up with all the same stories as the first one.  It moves muddily at first, allowing Ian Rankin to make an unexpected cameo before he’s swept away to honour a genius.  Gradually, the river begins to pick up speed. Soon we’re being buffeted headlong into the rapids before tipping, white-knuckled, over the precipice and into the broiling maelstrom.

“I wouldn’t have thought you’d remember, but I’ve been waiting twenty-two years to apologise for phoning you at home.”

It’s the second time we’ve had a crossover, and we both know that it’s quite a coup for me. There’s a pause.

“No, I remember.  It only ever happened once.”


He laughs and extends his hand.  I shake it and then climb out of the pool onto the street where Alexander Graham Bell was born and into the fog that’s rolling in from tomorrow. 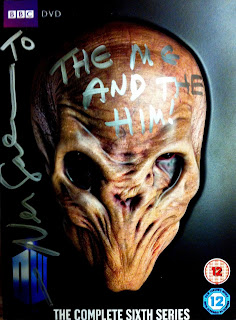 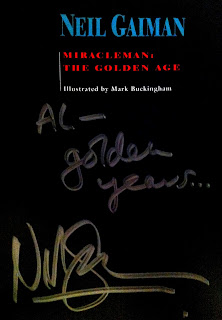 There is no such thing as reality.  There is only perception.
- Gustave Flaubert


Thanks
The organisers of the Stripped book festival.

Special thanks
Neil Gaiman - for letting me apologise.
and
My long-suffering PA - for making that apology possible.
Posted by Al at 21:35

A whirling story that has left me staggering for my Monday morning coffee. Very enjoyable. A pedantic aside: like white men, lice don't jump.

Delighted to have found this blog.

Me: Thank you and welcome aboard, thesecretdos!

It's a pleasure to have you here, hope you have fun (and also that you didn't spill any coffee - hurts like mad and it's a nightmare to shift).

I've fixed the louse libel too.